The Lady and the Unicorn

How did I miss seeing this for so many years? I was in Paris in 2000, but for some reason this was not on my MUST SEE list…I was in Paris in 1972, while I was an art student, and spent every day in the Louvre, but that was before I knew anything about tapestry. This time I had only one day to visit museums, and this was my top choice. 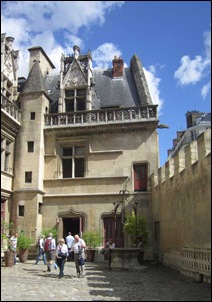 Even though the guide books now tell you that The Lady and the Unicorn is in the Musée Nationale du Moyen Age, in fact, you won’t find that on a map. They still call it the Cluny.

The Cluny Abbot Hotel was built, as a residence for the abbots, at the end of the 15th century, next door to the “thermes,” Gallo-Roman Baths dating to the 1st-3rd centuries.  The building is beautiful, in that magical medieval style. 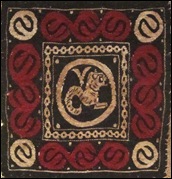 Before we found the Lady and the Unicorn Tapestries we were pleasantly surprised by an exhibit of Coptic tapestry fragments from 5th and 6th century Egypt.

What a treat! These tiny tapestries are so finely woven and so expressive.

I know that many tiny Coptic tapestries were either applied to, or woven into garments. They are well known for their use of eccentric wefts.

The Copts were (and are) a population of Christians living in Egypt, and their tapestries are legendary in textile history. What a thrill to see these up close.

Finally, the Lady and the Unicorn tapestries. I was practically speechless (which anyone who knows me would realize is quite unusual!) 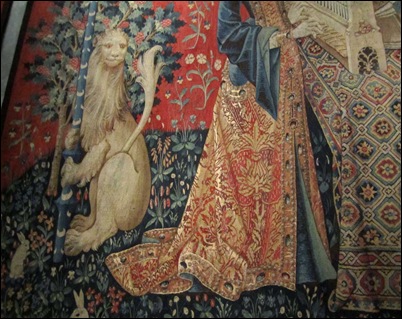 As a tapestry weaver I am so impressed with the technical virtuosity necessary to achieve the designs (like the patterns in the Lady’s dresses, for example).  As an artist it is clear that these tapestries were designed by a master of composition. 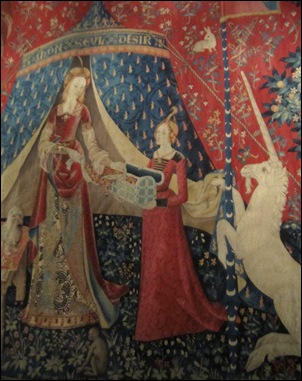 They are so well preserved, the colors are bright and most of the silk yarns are still there, and still lustrous (silk can often become brittle and just fall apart over time). That said, the bottom edges had rotted and been replaced at one time.

(please excuse the poor quality of the photos…the light in the gallery is very low, to protect the tapestries from further fading, and flash photography is forbidden)

As is often the case with old tapestries, there is a lot of uncertainty and controversy about their exact meaning. 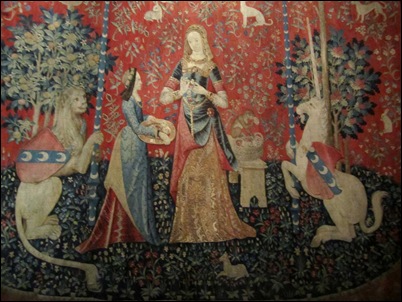 Experts believe that these tapestries are about the 5 senses: Touch, Taste, Smell, Hearing and Sight, plus a sixth sense: The Heart, or perhaps, Understanding. “A Mon Seul Désir” (To My Only Desire) is inscribed on a banner in this sixth tapestry. The symbolism is far too complex for me to write about. Apart from the lady herself, the lion, the unicorn, the trees, and her lady in waiting, there is a mille fleurs background, and many animals. Nothing is insignificant. 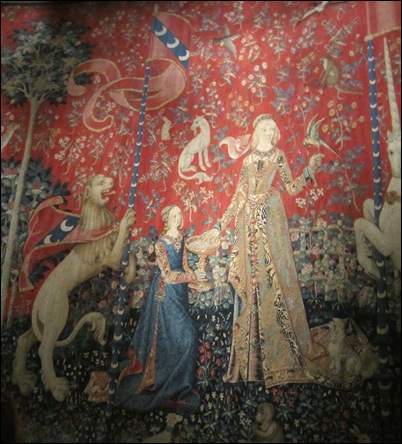 The designer has been established as the Master of Anne de Bretagne, but apparently there is no certainty about exactly where the tapestries were woven. It’s likely that they were designed in Paris and woven in Flanders (or perhaps Paris) around 1490-1500. They were commissioned by the Le Viste family of Lyon. 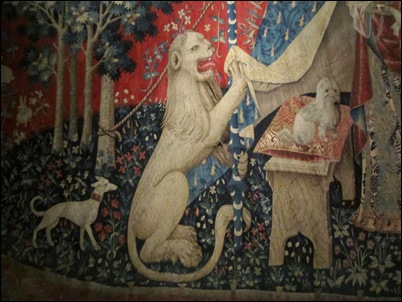 You can get some information, and see complete photos on Wikipedia. I love that it says it “is often considered one of the greatest works of art of the Middle Ages in Europe.”  YEAH!

There is also information on Tracy Chevalier’s website (she wrote the novel “The Lady and the Unicorn”).

It is not available on Amazon.com. There are 2 copies at www.abebooks.com, the English one is about $30, but the French one is $668.75 (???). You might be able to order the book from the museum gift shop for 18 Euros, but I don’t know if they will ship to the USA, or how much that would cost. Make sure you order the English version, unless, of course, you prefer French.

I'm so excited that you got to see these fantastic tapestries! And you sharing them makes me almost feel like I got to see them, too. Maybe someday....!

This sounds like it was so much fun. Wish I could visit these tapestries myself soon!

It was really a thrill. Did I mention that the gallery is round, and the lights are low, and everyone is speaking in very quiet voices? A magical feeling. I hope you both get to see them sometime. They are way better in person.

The Beauty of Tapestry said...

The Tapestry is simply amazing! Loving the details! The 6th Sense- The Heart and Understanding, so often forgotten. Thanks for sharing!

Jan, I was in Paris in 2010 and spent some time at the Cluny. I was so happy to have the opportunity to see these wonderful tapestries. Your pictures beautiful and make me remember the hushed awe I felt viewing them for the first time.