Last fall I attended a lecture at the University of Rhode Island, by Louise Martin, the head weaver of the unicorn tapestry project at Stirling Castle. I wrote about it on this blog and I said “I hope to visit next year.” So when we were planning our sabbatical trip, it was very high on my list of places to go. 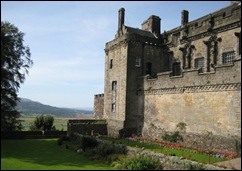 As part of Historic Scotland’s renovation, research turned up an inventory of 100 tapestries in the castle during the time of King James V, in 1539; among these was a set called “The History of the Unicorn.” Nothing more is known about the set, but it was thought that they were woven at approximately the same time as the Hunt of the Unicorn Tapestries, currently in the Cloisters in New York.
Thus the project in which 2 teams of weavers, one at Stirling Castle, and one at West Dean Tapestry Studio, are recreating the 7 tapestries of the Hunt of the Unicorn. They will eventually be hung in the Queen's Presence Chamber in the Royal Palace, which is currently under renovation. The entire project is expected to take 12 years. Follow this link, and look for the video link at the bottom of the page. 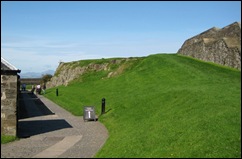 This is a photo taken in the nether bailey, just outside the tapestry studio.
On my first day in Stirling (see my travel blog, the Path and the Puddle for details) I walked uphill to the very impressive castle, and made my way to the weaving studio, where I was immediately impressed to find that the weavers have their very own guard! There I watched Rudy Richardson weaving for a while. You can stand directly behind the weavers, very close, but you can not speak to them while they weave. In fact, Rudy was listening to music on an iPod.
I found it very moving to see this tapestry being woven. The originals are among the most beautiful and celebrated tapestries in the world, and it was almost like being present at their creation, 500 years ago. The recreations, which are brand new, undamaged and unfaded, are exquisite, and the colors are delicious. 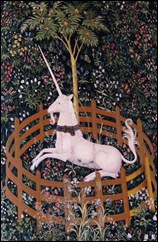 At 1pm, Rudy gave the daily “Weaver’s Talk,” which was very informative and gave me a chance to ask some questions. What a great way to educate the public about tapestry! People were fascinated. There is a life sized photo of the tapestry on the wall, and a weighted string hangs down to mark the point to which it has progressed. So it’s easy to see what shapes are being woven.
One of the other people in the audience was laughing at all the same things as me, so I decided she must be a tapestry weaver, and after the talk I introduced myself. It turned out to be Anne Jackson, one of the instructors for the upcoming British Tapestry Group workshops. We went up to the Chapel Royal together, and spent some time looking at the completed Unicorn tapestries. They are just fabulous, perfect in every way, and I just had to sit and look at them for a while.
Here are some things I learned: 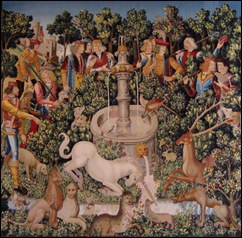 Because of the ceiling height, the tapestries are being woven at 90 % of the size of the originals. Also, to save time and money, the warp sett has been reduced from the 17-19 epi (ends per inch) of the originals, to 10 epi. So there is an additional challenge in the interpretation, having to weave the same images, only slightly smaller and with fewer warps.
The warp yarns are cotton, which the weavers tell me keeps a more consistent tension than linen or wool. Most of the weft is Wensleydale wool, which is custom dyed to match the originals. A smaller amount of mercerized cotton is also used, to replace the silk of the originals because modern silk degrades very quickly. They are also using gold thread, spun around a cotton core, instead of the original gilt. To match the colors, they have private access to the originals in New York, and because of the size, they use a hydraulic lift to get up close. 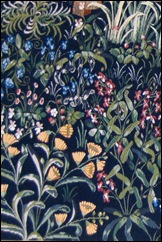 The cartoon process starts with photographs of the originals, reduced to 90% of the original size, then traced and printed to make the finished guide. It takes 5 or 6 weeks to complete a cartoon. Although every tapestry requires some adjustment, because of damage and repairs, the most difficult challenge will be on the 5th tapestry. “The Mystic Hunt of the Unicorn,” consists only of 2 incomplete fragments. They will have to figure out what was most likely in the missing parts.
Another difference between the originals and the new tapestries is that these are being woven from the front instead of the back. West Dean Studio’s weavers have been using this method for years, because they like to see what they are doing, and I must say, I agree heartily.
I was surprised to see that they were weaving without any shedding mechanism, just picking the warps with their fingers. It was explained to me that most of the weavers had not used leashes before, so it was just as easy to pick the sheds by hand. 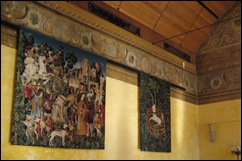 I saw weft yarns on bobbins, but the bobbins were only used to store the yarn, and to pack down the weft, not to pass it through the shed. They were not using butterflies either, just loose strands of wool. Apparently it was decided that the weight of the hanging bobbins put too much tension on the tapestry, and they also did not have enough.
I learned that to be true to the originals, and the weaving style of the period, there is no color mixing in the wefts. Only solid colors are used, and all the color mixing is accomplished with weaving techniques such as hatching, hachures and demi-duite (also known as pick and pick). Another technique you see in these tapestries is the use of small slits to make fine lines.
On Monday I went up to the castle again, and this time I got to see Mieko Konaka weaving, and hear her version of the Weaver’s Talk.
This project is so impressive, and the patience, skill and dedication of the weavers is amazing. Mieko was weaving a small orange tree, and she said she expected to be weaving that tree until December!

I look forward to seeing the 7 piece set hanging in the Queen’s Presence Chamber sometime in the future. Maybe you will too, but I highly recommend visiting while you can still see them weaving. It’s an experience I will never forget.

Oh, how wonderful for you to see this! I was SOOOOO tempted to leave home and husband to be one of the weavers on this project when I saw them advertising for one, but the time commitment was for several years. Thanks for sharing this!

What an experience! Thanks for sharing it! It is wonderful to see such dedication and promotion of tapestry. Hopefully, I can make it over there within the 12 year window!

Oh yes, I was tempted too. Forgot to mention that the 12 years began about 8 years ago, so you only have 3-4 years left if you want to see them weaving! EEK! I am hoping they will weave something else after this, it would seem like a shame to shut down the Castle's very own Tapestry Studio. Perhaps this will start a new fad among castles who now will all want some new tapestries!?

Wow, I knew nothing about this. How fabulous! I may just have to go and see it for myself! And a friend's 10 year old niece has just "commissioned" me to weave her a unicorn (which she designed herself), so maybe I should take her along on the visit!

LUCKY!! What a great opportunity! I've woven a couple of small fragment reproductions of the HotU tapestries for Living History purposes, but to do a complete set of the whole tapestries....

They didn't happen to mention whether they were going to publish any of their research on the originals did they? Or do you know contact info where I could ask them?

Brenda, I did ask about whether they plan to publish their research, and it's possible that they will, but nothing definite yet. You could try the contact on the West Dean Tapestry Studio website, they are in charge of this project.

Here is another link with more information.

You are welcome, Neia, I'm glad you enjoyed it.