One of the exhibits I saw at Convergence was “Small Expressions.” It was an excellent show, and I was honored to be included,  but a bit disappointed that it was in the Convention Center instead of in a gallery.

The organizers worked very hard to find gallery space in Albuquerque, but it was just not available. After all the work organizing, jurying, mailing and hanging this show, it’s too bad it was only up for 5 days! 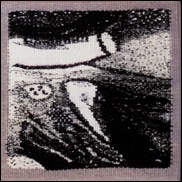 The juror was Rebecca A.T. Stevens, Consulting Curator of Contemporary Textiles,  at The Textile Museum in Washington, D.C. If I remember correctly from past years, there will be photos of the Small Expressions pieces in an upcoming issue of Shuttle, Spindle and Dyepot, the magazine of the Handweavers Guild of America. 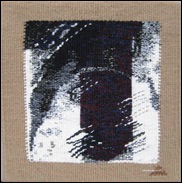 My piece in Small Expressions was Chaotic Fragments: Part 4 (above right), 9x9 inches. It’s the 4th in the Chaotic Fragments series, and that whole series is based on a larger tapestry called Chaos, which is 24 x 19 inches.

Chaotic Fragments: Part 1 (left), 10x10 inches. In this piece I included some very thin strands of dark red and blue, so that the black is not really black. 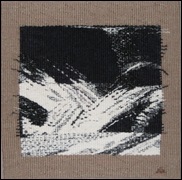 Chaotic Fragments: Part 2 (right), 10x10 inches. A detail of this was on the cover of the catalog for Connections: Small Tapestry International. The designs for these first 2 came from fragments that were cut into strips and then reassembled. 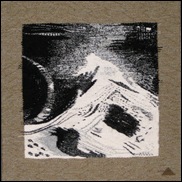 14x14 inches has been accepted into the American Tapestry Biennial 8, which opens in Lincoln, Nebraska in September.

More about this exhibit in a previous blog post. Excuse the repetition, but I thought it would be fun to see all 5 of these together!

I’m working on 2 more tapestries in this series, one large like Chaos, and one small.

I’ve had a great time experimenting with different ways to make black and white marks in tapestry. Below is Chaos, 19x24 inches. 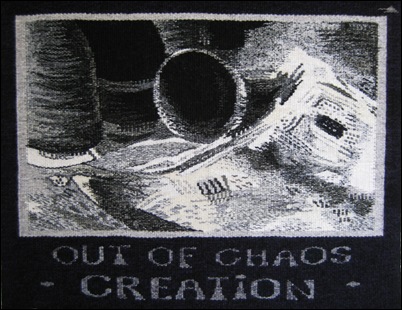 All the Fragments come from this original cartoon, cut into pieces.

As I wrote in the ATB8 catalog, these tapestries evolved from a 27 year old oil painting of my messy studio table….. 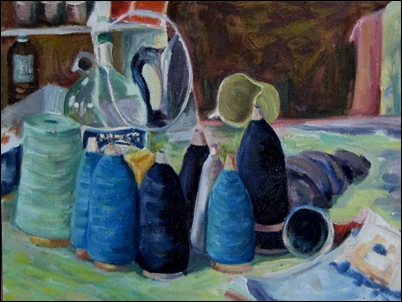 there was copying, dismembering, tracing, then in a flash, the fallen cone of yarn morphed into a black hole in the universe.  “I had found the chaos I was seeking.”

You're right: it IS great to see these all together! Such orderly chaos... I like them all and look forward to seeing more. They inspire me to try to order my life, and create something out of the chaos it has become in the past few months.

I'm glad you enjoyed our great Southwest! The monsoon season here is wetter than usual. I'm not used to this humidity - may as well be in your part of the world!

jeI loved the weather in the SW, and I had to laugh when a local told me it was NOT dry, because there had been a shower, and the humidity was 20%! HAHAHA, maybe it's been a while since you were here on a humid day. Just no comparison, today is a very nice dry day and the humidity is 64%!

It is amazing how black and whit is never just black and white! all the hundreds of mid-tones that the mind reads are fabulous. Great to see the series. Thank you for sharing. Gives us lots to think about in a series.
Ixchel