The Burgundian Booty - NOT

Before coming to Switerland I asked around, but nobody mentioned tapestries in Bern, the Swiss capital. At the British Tapestry Group conference, I first heard about the Burgundian Booty in a  lecture by Dina Ward.

These tapestries were left behind by Charles the Bold (also known at Charles the Rash), last Duke of Burgundy, along with a heap of other valuables when he fled for his life, after his defeat by the Swiss in Grandson in 1476. Just before the battle, Charles had ordered the execution of 412 Swiss men, and when the victorious army came upon the scene, this atrocity united them as never before. They went on to annihilate his army, one of the most feared in Europe, 4 months later in the Battle of Murten. 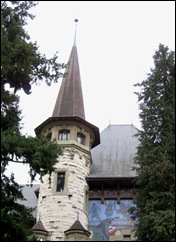 The Burgundian Booty is still displayed at various museums in Switzerland.

The two places I had been advised to visit in Switzerland were the Basel Historical Museum, where the main tapestry gallery turned out to be closed due to renovations, and the Abegg Foundation, which is closed completely for renovation. Wouldn’t you know, when I arrived at the Bern Historical Museum, expecting to see the Burgundian Booty, I found out that this exhibit was also closed!  In this case, it’s not because of renovation, but because some of the tapestries are on loan, some at the Getty in LA, and the oldest known Mille Fleurs on loan in Bruges and Vienna for an exhibit on Charles the Bold, he who lost them in battle. (For the Mille Fleurs, click on the link then scroll down the page) 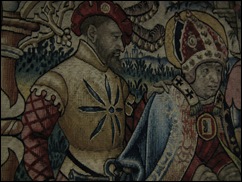 With typical Swiss understatement the receptionist said, “there is one tapestry downstairs...."

Well, that one tapestry turned out to be a series of 4, each about 12 feet long, "Leben und Tod des heiligen Vinzenz." 1515.  (The Life and Death of Saint Vincent).

These are spectacular! They are hung so closely together, it could be one very long tapestry.

So masterfully woven, colors still bright, some of the best faces I've seen in tapestry, and just loaded with hachures defining such lifelike folds in the robes.

They hang all in a row as one long narrative of the life of St. Vincent and his gory martyrdom. The topic is a bit disturbing, lots of stabbling and the like. 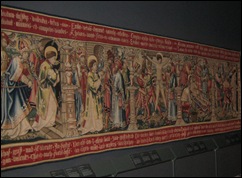 Each tapestry has a red border with beautiful gothic lettering, in Latin. In the catalog, the latin phrases are written, and translated into German.

Google translate was not helpful, neither was an online Latin to English translation tool. I believe the words tell the story, because in scene 9, where we see Saint Vincent being disemboweled, these words appear:  “burning, fiery , penetrate, wound, death.” OK, not the cheeriest story….reminds me of the book I used to check out of the library when I was about 9, called “Sixty Saints and How they Died.” 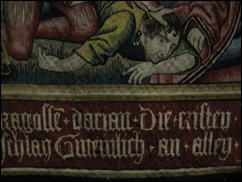 Here’s an example of Google’s translation of Scene 11: “sin as a rapper corpel preserves.”  Hmmmm……they really need to work on their German.

I bought the reasonably priced catalog, but since it's in German I've been sitting with my dictionary for hours, and never could find any information about where the tapestries were woven. Finally on a remote corner of the museum's website, after about 17 Google searches, I found a statement that mentioned they were woven in Brussels. 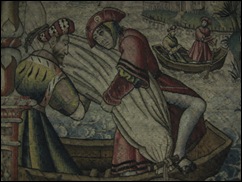 If this is what tapestries from Brussels look like, I can’t wait to see more!

I was also able to discern that the tapestries were woven specifically for the Bern Munster, which was dedicated to St. Vincent of Saragossa.

These tapestries were hung on panels just behind the choir seats.

I was allowed to take photos, but with flash not allowed, and the lights so low… I apologize for the lousy quality, and hope you can get an idea of what they are like. 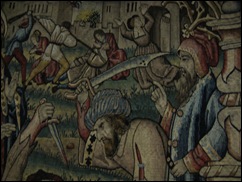 Don’t forget you can click on them to see the full sized images.

And what about the infamous Burgundian Booty? At least I got some postcards!

Four of the tapestries picture scenes with captions in French from the Story of Caesar.

They were woven in Tournai, about 1470, and are said to have belonged to Louis of Luxembourg, Count of Saint Pol, who was put to death as a traitor in Paris in 1475.

I found this information in the book "Tapestries; Their Origin, History And Renaissance", by George Leland Hunter, which is available in full text online. 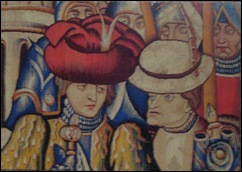 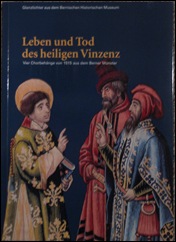 There are copies available through www.abebooks.com, from European booksellers; not sure if they would ship to USA.

Another wonderful post, Jan!! Thanks so much for sharing.
Tommye

Hi Jan! Haven't been to your blog since you were in Denmark, and MY you have been busy! Terrific fun living vicariously through your posts. Your pictures are quite good for having no flash. What a wonderful sabatical...for ALL of us! :-) thanks!!
e

Thanks Jan. Always a wealth of info and always a great adventure