In 2002, Monique Chmielewska Lehman, a Polish born tapestry weaver living in California, invited artists from all countries to contribute tapestries for a Memorial Tapestry Project, to honor those whose lives were affected by September 11.

After assembling the 90 tapestries, from 15 countries, Monique carried the entire project in her suitcases to be exhibited in Italy and in Poland.

It has also been exhibited widely in the US. Just recently it opened at the Riverside (California) Convention Center. You can see photos of the current exhibition here. Photos of the entire project, includ 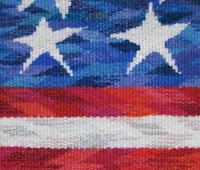 I knew right away that I wanted to participate in this project. My first idea was this semi-abstract design with the stars in the American Flag morphing into airplanes. I'm not sure what it means, but after I started it I realized it was the wrong size for the project. 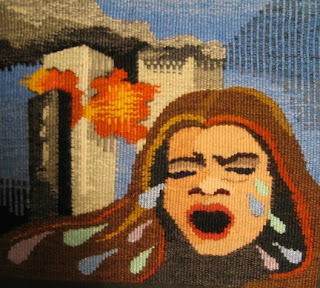 So I wove the second one: Blue Sky, Crying Child.
It was based on the memory of a photograph showing the faces of people running away from the World Trade Center.
It's hard to describe how I felt while weaving it, but in the end, although I like it well enough, it really doesn't do justice to my feelings.
Posted by Jan at 9:56 PM

It’s so nice site. We love to see more on this site. Keep on updating… MonkAreYou Bali
*jhgvghj