OK, so it was my idea, but Kim had to assemble them. Having a woodworker husband has spoiled me! 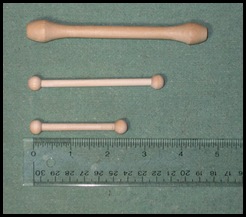 When I started weaving tapestries we were poor starving students, and there was no way I was going to buy bobbins. For 25 years I have used butterflies, or just short strands of wool.

A few years ago I tried some Aubusson bobbins, the ones that are rounded on both ends, and I like them very much. This photo shows the Aubusson bobbin on top, and my 2 sizes of mini-bobbin below. 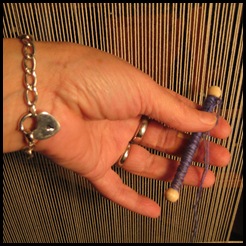 I often work small, and I use fairly thin weft, so it seems silly to use such large bobbins.

I also weave on frame looms sometimes, and since the shed is not that big, I wanted something smaller.

I just knew there had to be something out there that would function as a mini-bobbin, and then Kim told me about this great website: http://www.caseyswood.com/shoppingcart/zen-cart/ 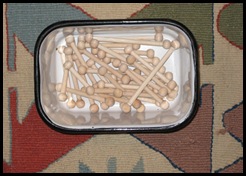 I also bought some dowels the same size, so we could make some slightly longer bobbins. 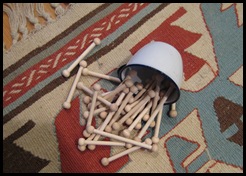 My problem was that the dowels and the pegs were slightly too thick to fit into the holes on the dowel caps. I tried sanding them, but then they were uneven.

Kim used his excellent woodworking skills, and a little glue, and in a very short time he brought me a whole bag of bobbins!  I’m already using a bunch of the longer ones, and we still have a dowel and some caps to make more. With the fairly thin wefts I use, I can fit about a 24” piece on the longer bobbin. 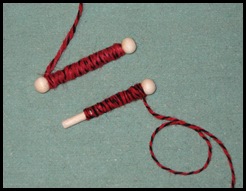 I tried using the tie pegs the way they come, and it worked OK, but I didn’t like it as much. I think you would not be able to put as much yarn on it, because it would slide off the end.

I had a little help with the photography from Xerox, my 16 year old cat, who came in and knocked over the cup full of bobbins. 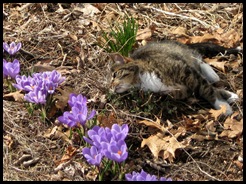 She’s been acting a little weird since she discovered my Catmint plant the other day! Here she is rolling around on it.

Click on any photo to see it full sized.

Aren't husbands handy to have around? I can't keep catnip. My cats, and the neighborhood cats, have even dug under cages to get to it and pull it all up. Your crocus' (croci?) are pretty - ours aren't up yet.

Handy husbands are VERY handy! I suppose the non-handy ones are handy in other ways....

My cat has ignored the catmint for at least 10 years (I had it in my previous garden too) so we'll see what happens now. This one is not the real thing, so maybe it only smells good in early spring?

How very cool! So now what do you tamp the yarn down with?

Great question, Jennifer, and one I should have addressed. Since I began weaving tapestries using butterflies, I have never used a pointed bobbin to pack down the weft. I use various kitchen forks I have collected over the years. I have my favorites! Perhaps that should be my next topic!

My husband made me bobbins in a very similar way, but he glued the cap on the dowel and then I stuck the other end into the pencil sharpener to get a point. After some light sanding, they worked just fine! Maybe they aren't as pretty as those I have seen but they were cheap!

That's a great solution if you like to use the point to pack down the weft.

The silly thing is that my husband has, and uses, a lathe, so theoretically he could make me some traditional, pretty bobbins, but I think you need a small lathe and/or small tools, and he felt it would be way too much of a hassle.

I actually think these are pretty cute, and some of the ones I bought, the wood is not as smooth as my home-made bobbins, so I'm very happy with them.