I have always wanted to visit the Massachusetts Museum of Contemporary Art, and finally I did it in November. During the ATA tapestry workshop in July, James Koehler mentioned Sol Lewitt’s Wall Drawings, which struck me as relevant to my plan for a 2011 Drawing Diary. Then in August I had a visit from my dear friend and former college roommate Abby, who lives in Bennington, Vermont, just a short drive from Mass MoCA. 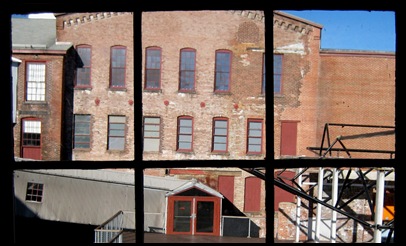 We have been trying to set up a meeting for a long time and this seemed like the perfect outing. As another coincidence Micala Sidore mentioned she wanted to see this show too, so now we were three! 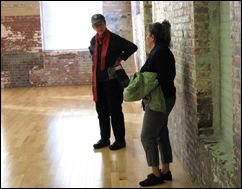 Mass MoCA is on a 13 acre historic mill complex in North Adams, a small city in Western Massachusetts. During the colonial period this area was home to numerous businesses including shoe manufacturers, a brick yard, a saw mill, hat manufacturers, marble works and more.
Arnold Print Works occupied the site from 1860-1942, at one time supplying fabric for the union army. They employed 32,000 workers in the early 20th century but in 1942 the effects of the Great Depression and the falling price of fabric forced them to move to a much smaller facility. Sprague Electric bought the site and turned it into an electronics plant that made components for weapons and the space program. 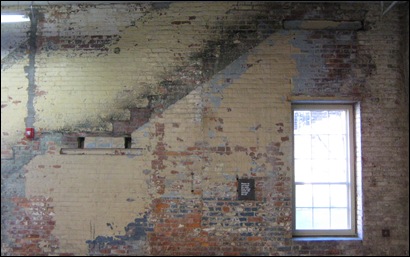 After Sprague closed in 1985, the town was looking for a way to use the property, and Thomas Krens, the director of the nearby Williams College Museum of Art was looking for an exhibit space for large contemporary art. With support from the Massachusetts legislature, the community and the private sector, the museum opened in 1999. You can see beautiful photos of the renovation by Nicholas Whitman. 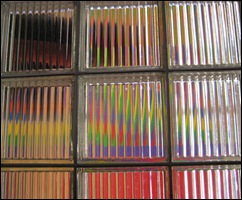 I love the building. The renovation preserved the feel of a working mill building. The brick walls have stories to tell, like the one above that shows evidence of an old staircase. I was as intrigued by the walls as I was by the artwork.

The Sol Lewitt Retrospective is in a 27,000 square foot building which was restored specifically for this exhibition. It took 6 months and 65 artists to complete the installation of 105 wall drawings. The artists included 22 assistants who had worked with Lewitt, 33 student interns from Yale, Williams, Massachusetts College of Liberal Arts, and other colleges, and 13 local artists. 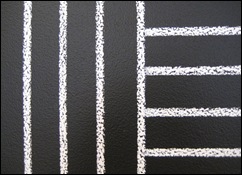 The Yale University Art Gallery owns some wall drawings, and the entire wall drawing archive (donated by the artist), and their director Jock Reynolds, collaborated with Lewitt to plan the retrospective, and with Mass MoCA and Williams College Museum of Art to create it. Lewitt  made some new works for it before his death in April 2007. Since the exhibit opened in 2008, I assume Lewitt did not get to see it, which is very sad. This is the first time the wall drawings have been gathered in a group, in the past you had to see them one at a time in far flung galleries. 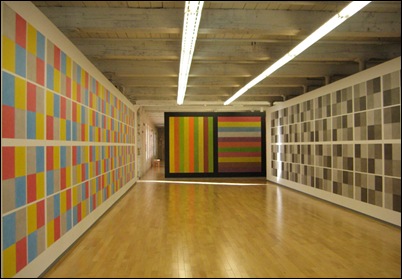 I was not sure what to expect; Lewitt was a leader in the field of Conceptual art, a movement with which my art school professors were quite enamored back in the 1970s.
It never did much for me, obviously, or I would not have turned to tapestry weaving!
Lewitt believed that the idea was the real work of art, and that the execution of the art could be performed by others, which makes perfect sense given the history of tapestry weaving. 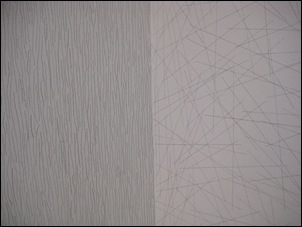 In this case, each wall drawing consists of a set of detailed instructions. For example, the left side of this photo shows Wall Drawing 46, and the instructions read
“Vertical lines, not straight, not touching, covering the wall evenly.” 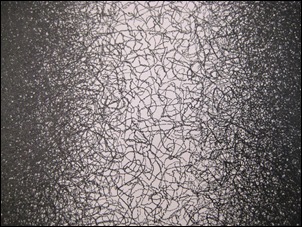 The materials range from pencil and chalk, to transparent ink washes, to glossy enamel paint, and cover the years from 1969-2007.
I had a great time taking photos of these. 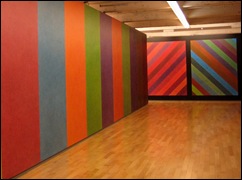 They are all very large, and cover the walls completely, so there were many places where I could see 2 or more at the same time, and taking a step to one side would change the view radically. These drawings were made with translucent colored ink washes, giving an unusual matte finish that makes the colors glow, almost like wools in a tapestry. 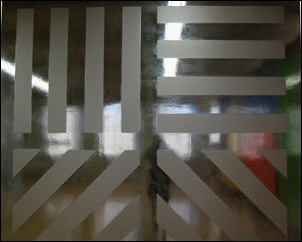 In other cases, with the glossy drawings (executed in acrylic paint) reflections of another drawing seem to add a three dimensionality to the work.  This is 821, alternating glossy with matte bands of black. 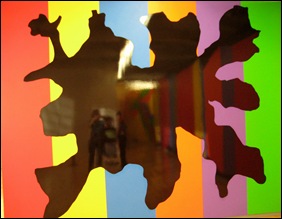 Wall Drawing 901 consists of colored bands and a black blob.
The blob is glossy, and has the same properties of reflection as 821.
I  wonder whether Lewitt considered this possibility, given that most of the wall paintings were not in groups.
Below is Wall Drawing 880, “Loopy Doopy.” I found it painful to look at because of the intense contrast of the orange and green. Apparently the painters did too. They executed this by taping the wall, so they never saw both colors together until it was almost finished. Then when they did the final touch up they discovered the dizzying effect of the contrast. 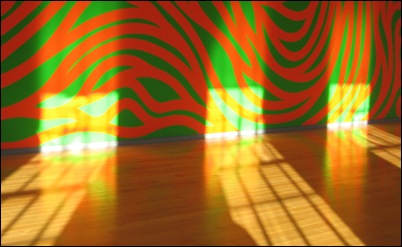 I didn’t notice the effect of the sunlight on the walls until I looked through the camera. It almost looks like the wall is glowing from within.
On the right is a photo of 2 different drawings, on walls that are at 90 degrees. The composition of this photo would be something else if I took a step to one side of the other. 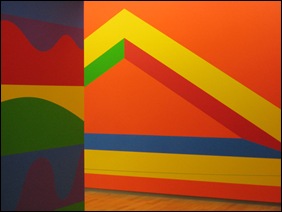 The catalog, “Sol Lewitt: 100 Views” can be purchased here. You can also see all of the works on the web here and some time lapse photos of their creation.
Because of the size, you really have to see them in person.
The exhibit will be at Mass MoCA for 25 years, so you have plenty of time to get there!
For more about Sol Lewitt, check out the Artsy Sol Lewitt page here


Technorati Tags: Sol Lewitt,Mass MoCA
Posted by Jan at 12:54 AM

Wow! Fantastic coverage of the review, Jan. Now I am determined to go see it. Glad I have 25 years to get there!

I meant, 'fantastic coverage of the exhibit' or 'fantastic review' or something that made more sense. Early morning here. No coffee yet.

The wall drawings are very cool, but I really dig that old brick wall with the ghost of a staircase running across it.

Thanks for all the information about this exhibit. I love the work and can't really imagine how large the works must be. But it's just the kind of thing I love to weave. Interesting about the inks, also. Wish I could say that I'll get there someday to see them in person, but probably not.

Thanks for sharing this Jan. It looks like something I should go see in the next 25 years. Lots of food for thought.

I'll definitely be going back, I want to take my husband because I know he would love the walls, and maybe even the wall drawings.

And just for planning purposes, there are only 23 years left to see it so don't dally 8-)