is almost done! I had a little scare when I saw how little warp I have left, but it will be enough….whew, just barely enough, but enough. My one inch weeks were expanding into 1.5 inch weeks, but now I’m being very careful to keep them to an inch or less. 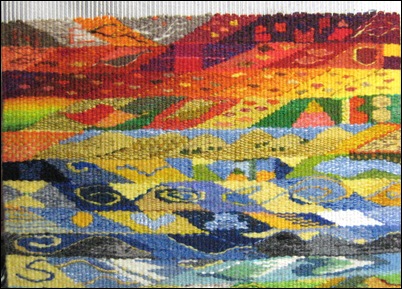 September was just obviously blue and yellow, I don’t know why but that was clear to me right away. I made October all shades of red, yellow and orange, for the fall foliage and because it just seemed like it was about time I used colors like that. November is brown, orange and white, and I’ll decide on December when it comes up. One thing I love about this project is that I can play it by ear like this, no thinking ahead. 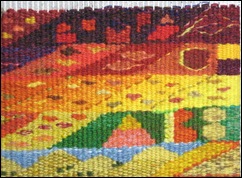 In addition to colors, I have also been choosing images to weave, like in September I wove a lot of spirals, in October leaves, and in November I’m doing tree branches. Of course I continue to include special occasions.

The yellow hills are from my trip to California.

As much as I’ve enjoyed this, I have decided not to do it again in 2011. I have learned so much, using the diary to try out new ideas, and techniques. There is really no worry about the final product because every day I weave just that one parallelogram, which is just one 365th of the tapestry! 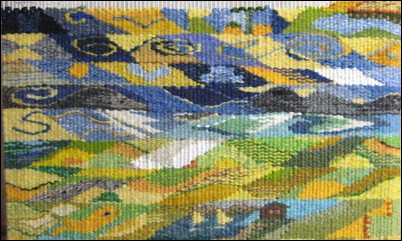 Next year I plan to do a drawing diary, but instead of doing a separate drawing for each day, I want it to be like the tapestry where each day’s drawing is just part of a larger whole. So I will probably take a large piece of paper and make a grid. I will also choose a topic for each month, like, for example, Moon Snails. I might also choose a medium for each month, like a colored pencil, or pen and ink, or graphite pencils or china marker.

I hope to learn as much from my 2011 drawing diary as I have from this 2010 tapestry diary.

I can hardly wait to see this in total, Jan! What I see here is lovely.

I'm also planning to do a sketch a day project in 2011 - already bought the sketchbook. Maybe we could set up a separate blog to encourage and share?

Rebecca, YES this is a good way to lure oneself into the studio. It's so unthreatening, it makes it easy to get started. I also suffer from that resistance.....Then there I am and I want to do something more. When I'm really busy though, I end up JUST doing the diary and I wonder sometimes if I would be working on my real tapestry if I didn't have the diary? One reason I plan to draw instead next year. Also, you have to devote a loom to it, which takes space in the studio.

This kind of project seems to fit you perfectly, Jan! It's wonderful.