Victoria BC, Fremont CA and ATB8 in Nebraska

Just back from a long trip. I was away for 13 days and it sure feels good to be home. 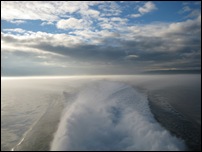 The first leg was a flight to Seattle, WA, where my friend and fellow tapestry weaver Ellen Ramsey picked me up at the airport and treated me to a delicious dinner at Wild Ginger. I stayed at a downtown hotel so I could make the 8AM passenger ferry to Victoria BC. The weather was OK, but the views would have been better on a clear day. 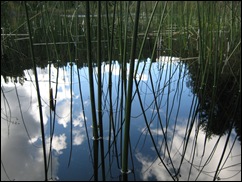 In Victoria I stayed with my Dad’s cousin, Kathy, who lives in a lovely little wooden house on a lake. I’ve heard about her my whole life, and we’ve been pen pals for a few years, so it was great to meet her in person. We had so much to talk about, since we have a lot of relatives in common: her mother and my grandmother were 2 of the youngest from a family of 14 kids. I spent hours sitting on the dock trying to get a photo of the huge turquoise dragonflies, but they would NOT sit still or even slow down. So instead I got lots of photos of the reeds and the reflections. 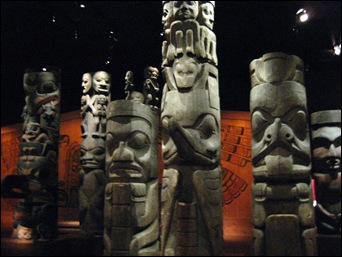 I spent a few hours exploring the city of Victoria, which is really lovely. It’s the provincial capitol and has some gorgeous architecture. I was inspired by the First Peoples exhibition in the Royal British Columbia Museum. There is also a collection of totem poles outside the museum in Thunderbird Park; you can see an online exhibit here. 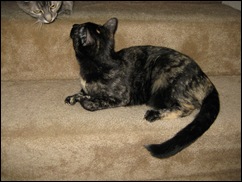 Next stop: Fremont, California, to visit my daughter Zoe on her birthday. The weather was gorgeous, and it was great to see Zoe, her husband Jason, and the grandkitties.

I took the BART to San Francisco and the ferry to Sausalito one day, and met my cousin Posey. 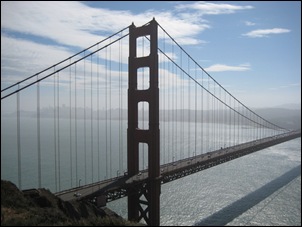 We drove up to the Marin Headlands by the Golden Gate Bridge. The views are amazing from there.

Then I visited tapestry weaver and old friend Alex Friedman in her spacious studio. 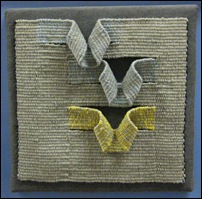 Alex has been experimenting with 3 dimensional tapestry the past few years, this one is “Big Soft Flips,” 9x9”.

She was preparing to hang an exhibit, “A Show of Hands,” which is at the Gail Van Dyke Atrium Gallery, Marin Cancer Institute, Green Brae, CA until January 7, 2011.

Here’s the tapestry that is featured on the exhibit postcard. It is titled “Flow: Unfathomed. 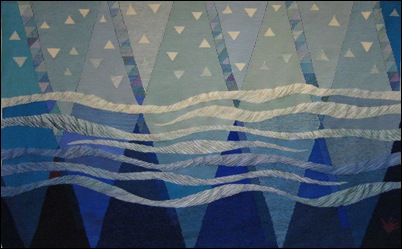 Last Wednesday I flew to Omaha, Nebraska and rented a car to drive to Lincoln. My purpose was to attend the opening reception of the American Tapestry Biennial 8 on Thursday evening. 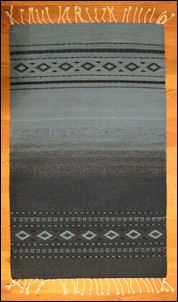 I met friends Sue Pretty, Lany Eila and Elizabeth Quick, all fellow tapestry weavers and exhibit participants. The exhibit opening was planned to coincide with the Textile Society of America annual meeting.

We were not registered for the meeting, so instead of listening to lectures (some of which did sound very interesting), we visited some of the 32 exhibits in the area.

Our first stop was the TSA Marketplace in the hotel. It was hard to tear ourselves away, but luckily many of the vendors did not take credit cards, so we were able to get out before we bankrupted ourselves on delicious textiles. 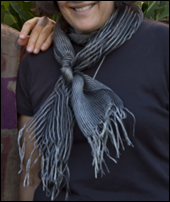 I bought a lovely small indigo-dyed rug from Veggie Zapotec Arts. (It’s much more blue, but I took the photo at night….)

Then I bought a silk scarf from India, black with very thin white stripes. I always like to match my tapestry at the opening reception!

Next we drove to the Elder Gallery on the Nebraska Wesleyan campus, and had a nice, leisurely visit with ATB8. 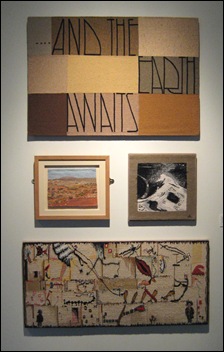 Since we were the only visitors I got a lot of photos without people in the way. This is an impressive exhibit, with a lot of variety. It’s never easy to hang such a show, but the 3 room gallery is very nice, and they did a great job.

My only complaint is that there were a few areas that were not quite adequately lighted, like the very top of this group, which is Archie Brennan’s tapestry. Below left is Janet Clark, then me on the right, then Pat Williams below.

Don’t forget you can click on the image to see it full sized. 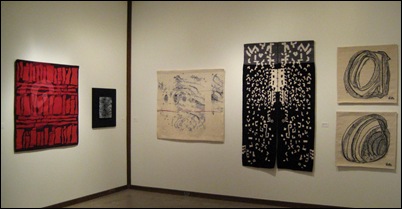 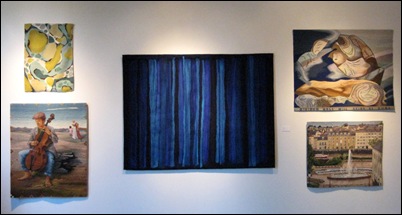 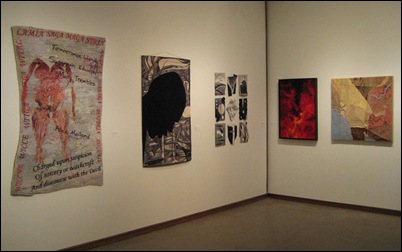 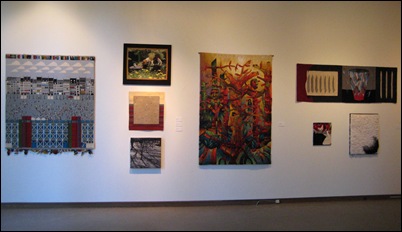 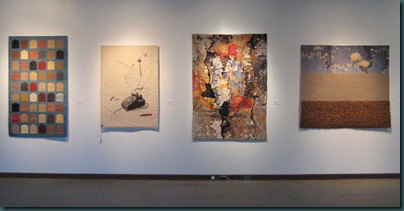 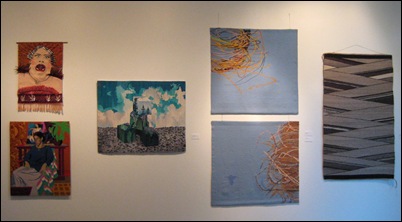 This is an interesting grouping, with a very large, 3 dimensional tapestry by Mary Kester and two tiny tapestries by Kathe Todd-Hooker. I think it works, but it looks a little shocking in the photo because you can’t see the space around them. 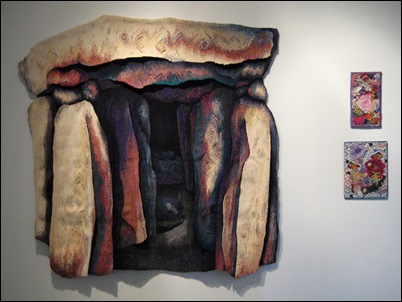 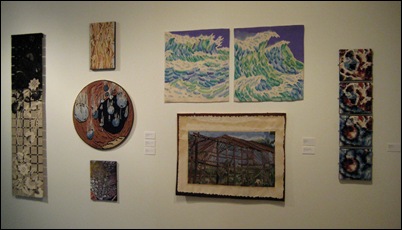 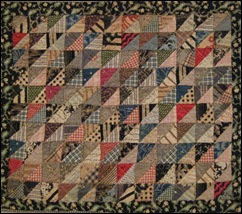 I didn’t mean to photograph the entire exhibit, but as our group moved around I shot photos of whatever was unobstructed. Later I realized I’d photographed almost the entire show, so I apologize to those few whose tapestries were left out. 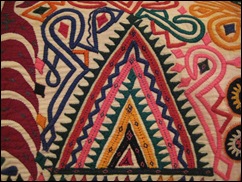 This  modern museum on the University of Nebraska campus opened in 2008, and was on my must-see list.

It was founded in 1997 when Ardis and Robert James donated their large quilt collection. 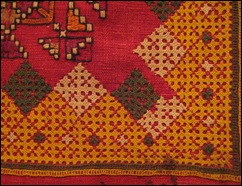 We saw an exhibit of ralli, kantha,  bullock covers and snake bags (really!) from India, Pakistan and Bangladesh, and another exhibit of doll quilts. 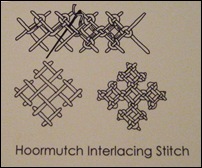 One of the South Asian quilts (above left) featured an unusual embroidery stitch, which I was wondering about, until I saw that it was illustrated on a poster.

It’s the Hoormutch Interlacing Stitch. It almost looks like darning. 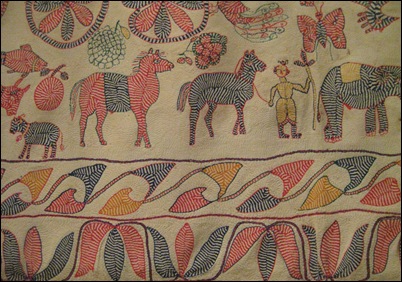 Our last stop for the afternoon was the Nebraska State Museum, to visit “A Turning Point: Navajo Weaving in the 20th Century”

This show displays some of the very finest Navajo weavings, curated by Ann Hedlund. Sadly, photographs were not allowed, but there are some on the museum’s website. 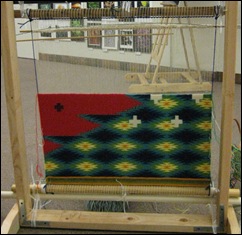 An extra attraction was the demonstration by Navajo weavers Melissa  and Lola Cody and Martha Schultz. I met Melissa at the Southwest Indian Arts Fair a few years ago, and was impressed back then by the large and very intricate rug she was just beginning.

It was fun to catch up and see photos of the finished piece. I don’t think she has a website, but here’s a photo of her demo loom with a piece in progress. 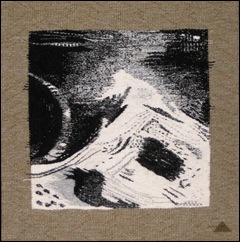 Finally it was time for the ATB8 opening reception. There was quite a crowd, and a lot of the artists were present. Exhibit chairs Michael Rohde and Susan Iverson said a few words, then the artists were introduced, and the juror, Rebecca A.T. Stevens asked if perhaps we would each stand next to our tapestry so people could ask us about our work. I had a good time meeting new people. Luckily for me, my tapestry was right above Pat Williams’, so we had each other to chat with between visitors. Even the food was excellent. Who knew Petit Fours could be so moist? I had to try one of each flavor of course.

What a fantastic trip! You got a much better view of the Golden Gate Bridge than I ever saw there. And I love Victoria! My trip pales in comparison - but it was mostly a husband-business and a family-visit trip.

It was a great trip, but I'm such a homebody I was really ready to be home after 13 days. Victoria is one of those places I'll have to return to, 4 days was not enough.

Thank you so much for posting all those photos of the ATB8 show! Now I am wondering if I should drive the 13 hours to Lincoln to see it myself. It looks so wonderful.
Rebecca

13 hours is a lot of driving, but closer than driving to Massachusetts! Seriously, it's so different seeing the real tapestries than just admiring the catalog, or my photos. Too bad you can't just beam yourself up.

Re: Hoormutch stitch. This is also known as Armenian Interlacing, or Maltese Cross. It is a two layer stitch - the first layer is based on a standard Herringbone. The second layer is interlaced so that there is an over/under pattern for both layers. Most of the designs are straight bands, but some are free-standing designs. Fun stitch to do!