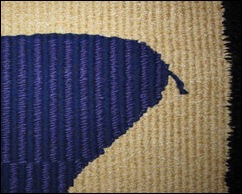 Some of you have heard the story of how one of my tapestries went missing from an exhibit. This was in about 1980, and the exhibit was in the galleries at the Durham Arts Council in Durham, NC. I also had a studio space in that building. (Looking at their website now, I see it’s the same building, but it was renovated in 1988…not a moment too soon; my studio was on the ground floor and sometimes when it rained, water came through the 2 stories above me, right through the light fixture, and filled up the empty jars holding my paintbrushes!) 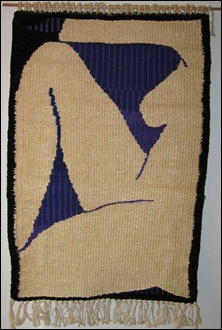 I was really upset about the tapestry being stolen, because I had finished it just in time for the exhibit, and entered it without taking any photos.

A few weeks later I saw something strange poking out from a large potted plant, and it was my tapestry. Someone had slid it off the tacky dowel it was hanging on (this was before I had a clue about velcro and all that), folded it up, and stuck it in the pot.

At the time I assumed it was a thief who intended to steal it and then chickened out.

It was only many years later, after taking a library school course on Intellectual Freedom and Censorship, that it occurred to me, this may have been an act of censorship rather than a botched theft. For reasons that are unfathomable to me, some people are offended by images of the human body, even when highly abstracted. Lucky for them they don’t live in Florence where they would be having the heebie-jeebies daily! 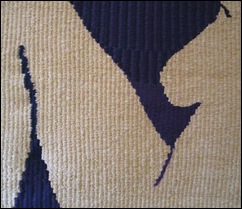 At the time that I wove this, I was weaving mostly functional items and had very little tapestry experience.  The weft is a combination of strange rayon-ish synthetic yarns, with a border of a shiny black chenille, and the warp is 12 ply cotton tobacco twine, set very coarsely, maybe 4 epi. Hey, it was what I had, and I was a poor starving student married to a poor starving student.

The title is Life Study. It’s about 30 x 18 inches. I wince at the messy fringes top and bottom and the cheesy dowel. 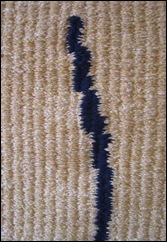 The interlocks are VERY messy, but I still like the design.  It’s a holdover from my high school days when I painted many posters of abstracted nudes, and my family would play “Find the body.”

I was not trying to be mysterious, I just thought it was fun to look at the shapes of positive and negative spaces (although I had never heard those terms used).

I ran across this tapestry in my attic recently, and decided to write about it since I have had NO time to weave anything new this summer. Hopefully that will soon change.

I like this tapestry and enjoyed your true crime story. Your comments about censorship remind me of a recent exhibit I went to. Another viewer stopped by the desk after viewing the exhibit, commenting that she'd seen five nipples. I had two thoughts--who goes around counting nipples and how would she react in the Cistine Chapel or many other sites in Europe.

Hey, you can find nipples just about anywhere it you are looking!

There is a commonality to the shapes of nature: Human bodies, animal bodies, insects, flowers, trees, cells. When you represent one of these you are representing all of life, that's how I feel anyway.

I love the fact that I had to look carefully at the piece to find the body!! Gorgeous work ;)

What a great story Jan! I have a cure for anyone who has problems looking at the female form-- work as a labor & delivery nurse for a few years! After that, nothing will be shocking.

By the way, wouldn't that be a great theme for an ATA online exhibit... the human form?

I'm glad you enjoyed the puzzle, Michelle! Lyn, you are so right! I was thinking about my med student daughter, who will be doing "Gross Anatomy" soon.

I agree it would be a great theme for an online exhibit, not we just have to find a willing volunteer, hehehe.....

I'm happy your tapestry wasn't stolen (I can imagine the relief when you found it!!), but the story is amazing! I had never imagined that somebody would be bothered by this kind of things! Maybe it's because in Italy we are used to see naked bodies in ancient sculptures, fountains, paintings so we hardly notice them (sometimes even in churches! And "Madonna feeding a baby Jesus" was a very popular subject in paintings at some point of history...It's incredible that some people could find that offensive!)
Well, at least I'm glad you found your tapestry and it was still in good conditions!!

Love the piece!!!!
Am worried about the lady who saw 5 nipples in the comment. 5?

I agree that it's strange, people being so uncomfortable with the human body; after all, we each have one! I have always wondered how those people would cope with visiting a European city, especially one like Florence or Rome, with nude sculpture everywhere!
The lady who saw 5 nipples was at an exhibit; who knows, maybe there really were 5 nipples, but as Sherri said in her comment "Who goes around counting nipples?"