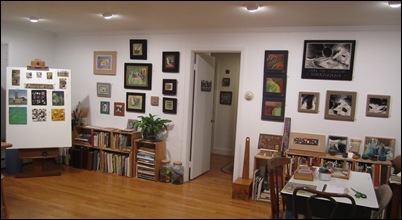 The weekend before last I participated in a local Studio Tour. It was really amazing to see how much space I have in my studio, once I got it all cleaned  up! I was also amazed at how many tapestries I have…..that’s a bit depressing actually. 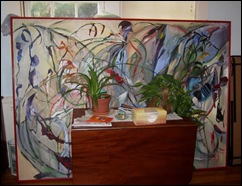 I own a large painting by Ruth Dealy, which I bought when preschoolers were pals about 25 years ago. It’s 61 x 86 inches, and the only wall in our current house that’s big enough is in my weaving room, or so I thought.

I didn’t want someone else’s art on display for the Studio Tour, so I moved it into the dining room, temporarily. Here it is between the wall and a drop leaf table. I realized then that I could hang my largest tapestry in its place.

Luckily, with my handy measuring tape, I discovered another wall that is big enough for the painting; it’s in the guest room, so I’ll have to go lie on the bed and meditate on the painting, which covers an entire wall. One thing I love about this painting is that I will never get bored with it, there is so much to look at. 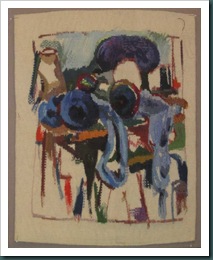 I finally accepted that I will never have time to frame all the small tapestries, so I pinned a bunch of them to a  piece of painted sound board, then put it on my easel.

Visitors could see my framing process, as I had 3 tapestries in various stages of framing, including this one (“Weaver’s Palette”) pinned to its frame, with the curved upholstery needle threaded, ready to sew.

I had 2 small tapestries professionally framed, so folks could see how nice that looks. 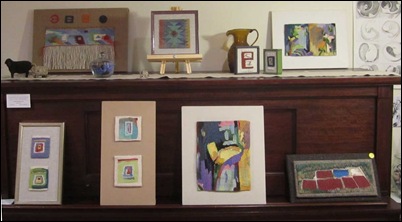 The folks at Finishing Touches are very good with framing textiles, so I kept a pile of their business cards on the piano, next to the 2 tapestries they framed. By the way, a piano makes a lovely display case! 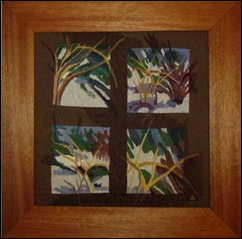 I was delighted to sell two tapestries, “Winter Forsythia,” (right) and “Cranberry Bog.” (Below). It was great to send them out into the world.

“Cranberry Bog” is the one that I wove for the Australian exhibit, “LAND.” It’s only 4 inches tall, and is based on a photo I took from my husband’s small airplane, of a Cape Cod Cranberry Bog in March.

I figured they wouldn’t have too many other cranberry bogs in the exhibit. It’s always nice to be unique.

This was my first year, but other artists say the numbers were down from last year, and that people bought less and smaller, less expensive items. That’s no surprise with these economic conditions.

It’s not just about sales.The best thing about the studio tour was talking to all the visitors, and explaining what I do.

One artist said she sold a painting to a customer who had visited the year before, fell in love with the painting and finally bought it this year. Others said this event is the best advertising, and I believe it. I made a lot of good connections, got a list of people interested in taking classes, and enjoyed demonstrating tapestry weaving. 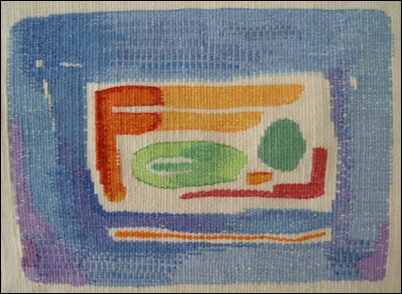 I had about 25 visitors on Saturday and 40 on Sunday. Some were friends, co-workers, fellow weavers, and neighbors. Most were strangers, but all were very interested in learning about tapestry.

I consider it my mission to educate the public about tapestry weaving, so we won’t have to read any more newspaper articles about the dead art of tapestry. (I guess they don’t know about the 500 members of the American Tapestry Alliance!) 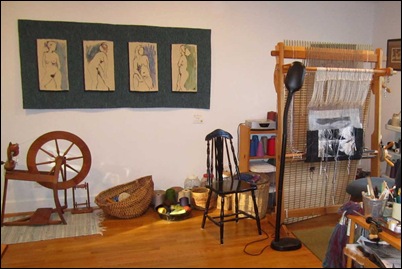 The black and white tapestry that is on my vertical Glimakra loom in the above photo, had 7 inches left to weave after the studio tour. I wanted to enter it in a juried show with a deadline of Monday, October 31. Today.

I had planned to work on it the week before the tour, but it was more work than I expected, cleaning up the studio and hanging tapestries everywhere. 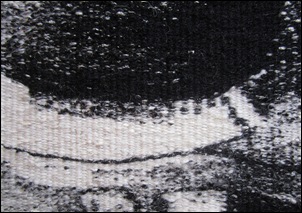 I figured out that if I could weave one inch per day it would be finished in time. It’s only 24” wide, but I do a lot of picky stuff, like twisting my black and white blended wefts to line up every spot exactly where I want it, at exactly the right angle.That takes a lot of time.

Then I missed 2 days of weaving because life happened. I was determined to finish it, and in the end, I wove through the night, finishing at 5.30 this morning. Luckily I am a night owl, and never felt sleepy.  Yay! I did it!

Loved reading about the studio tour and seeing all your tapestries. I worry about having strangers traipse through the house for an open studio. An rented studio space would be attractive for only that reason.

And I had wondered if you were a night owl, since you posts are seldom during the day.

Your studio looks so large and bright! Is most of the light artificial. or does it have natural light too?

Sherri, yes, you caught me being the natural night owl that I am. Although 6AM is unusual even for me! Also, I try not to blog or facebook or email in the daytime (unless I have to) cause then the whole day disappears!

I know what you mean about people traipsing through the house, but my studio is an addition on the back, and my husband and his friend sat in the kitchen (adjoining the studio) serving cider and keeping an eye on the visitors to make sure nobody traipsed where they shouldn't. All the visitors were very nice and respectful of my house and studio.

Kathy, there is pretty good natural light, but not enough for tapestry of course. There are good sized windows on the east and west sides, but nothing on the north or south, and we have lots of big trees very close to the house on the west. So my husband put in very nice recessed eyeball style ceiling lights for me, just last summer. Before that I had many many lamps. Now I just use ONE task light next to the tapestry loom.

I am so impressed with the great photos of your studio! Congratulations for the studio tour going well - and finishing your tapestry!
Happy weaving,
Vera

Jan, your studio looks wonderful! I love the way that you have displayed your work. I had hoped to get up there for Open Studio, but just didn't make it...."Next year".....

Thank you for the link to our website, and for the "pile of business cards on the piano" we really appreciate that!

My best to you,

I feel very good to read your comments and this will of weaving, where the silence fills the night

I really, really enjoyed reading about your open studio event. Goodness you have so many tapestries. Everything looked splendid! Just wish I could have been there!