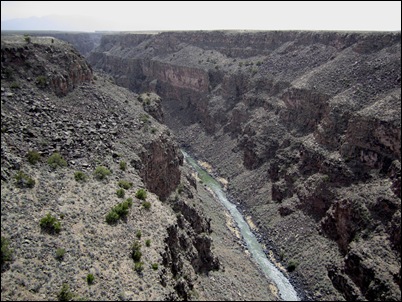 Despite the high winds and dust, I decided I had to see the famous Rio Grande Gorge Bridge, which is only 10 miles from Taos. 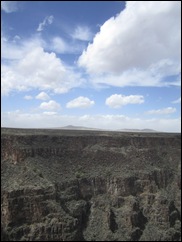 There is a small parking lot next to the bridge, but it was impossible to see much from there, and I saw somebody walking across the bridge to take a photo.

Off I went, with my fear of heights, and having the feeling I might blow overboard.

I’m sure I looked foolish clinging to the railing all the way. I’m glad I didn’t know it at the time, but I heard later that the gusts were up to 60 miles per hour! 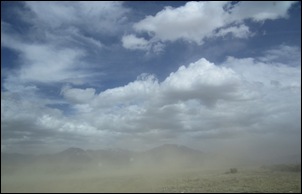 The sun came out, and those amazing New Mexico clouds appeared.

As I drove back towards Taos I had to keep stopping to get photos of the clouds, the mountains, the trees. Even the dust! 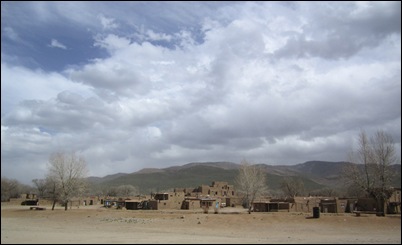 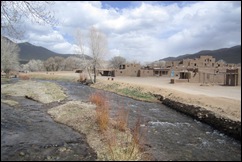 Some of the adobe buildings are 1000 years old, and they are still inhabited.

The north and south villages are on either side of Red Willow Creek, which flows from the tribe’s sacred Blue Lake in the Sangre de Cristo Range. 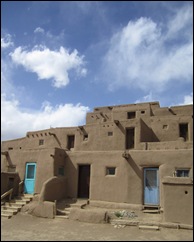 I had a lovely tour from a young woman who told me all about the history of the church and the Pueblo Revolt.

We stayed inside the San Geronimo Chapel, to avoid the dust blowing around outside. Photos are not allowed inside the chapel, but it was very beautiful with wonderful stained glass windows.

She explained that the river comes from Blue Lake, 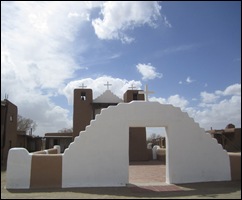 which is not only the source of their drinking water, but of the people themselves.

The lake and the land around it was taken by President Theodore Roosevelt as part of the National Park system in 1906, but was given back by Richard Nixon in 1970. 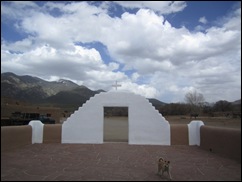 ed around, taking lots and lots of photos, accompanied by an adolescent dog who seemed to think I needed an escort.

I entered a tiny shop where the proprietor greeted me with wet clay on her hands. 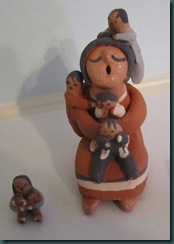 She was making Grandmother Storyteller figures, which is just so serendipitous, since I already owned 2. Obviously I was supposed to buy another one. Then I saw the minis, so now I have 4! Here are the 2 that I bought at Taos Pueblo. The artist wrote her name on a card for me, but I lost it, sad to say.

These figures take me back to the times when I would read aloud to my children in the library, and suddenly realize I had acquired about a dozen more kids!

It was a beautiful day, and an inspiring place.

NOTE: You can click on any photo to see a larger version.