Back in April 2011, Anne Jackson came to the American Textile History Museum to present a lecture about her work.

I knew that TWiNE (Tapestry Weavers in New England) members were fascinated by her tapestries and curious about her knotting technique, so I convinced Anne to present a day long workshop the day before the lecture. 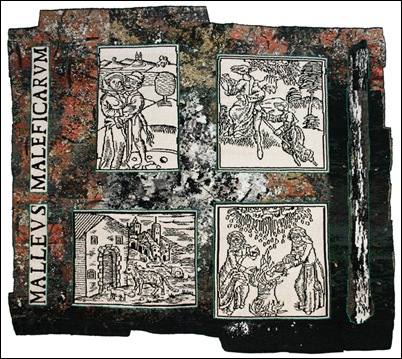 We met at the museum, in their lovely education room.  I supplied all of the materials, which are pretty simple. All you need is a piece of Sound Board (“Tentest” in UK), some T-pins or large sewing pins, and some yarn. The yarn should be smooth, and can be cotton, rayon, linen or a blend of thin threads. 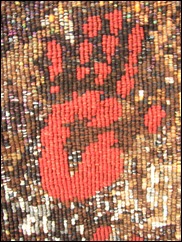 We spent the morning learning the technique, then in the afternoon Anne presented a slide talk about Creativity, Sources of Inspiration and Working Practices. Some  of the participants shared images and comments on these topics as well, and it was really inspiring.

In my first knotting effort (below), you can see that we started off using a heavy cotton, and we used it with both warp and weft doubled.

So the knots at the top (the left in this image) are very big.  Then I used the same yarn (Lily “Sugar and Cream,” a good weight for both warp and weft for learning), only not doubled. When I got home I thought it would be simple to make a sampler like my tapestry students: Squares, Triangles, Curves….it turned out to be more challenging than I expected.

I tried color blending, using combinations of thin cotton, and played with dropping warps to create triangular shapes at the end. This is a great technique for making shaped pieces.

I have found knotting to be totally addictive.

For a few weeks, every time I went into the studio to weave, I found myself pulled away from the loom. It’s really fun to just play with something new, to see what it can do.

I made myself some smaller boards for travel, and then realized that, unlike tapestry, it is very simple to just remove an unfinished piece from the board, fold it up until later, and pin another one onto the same board. 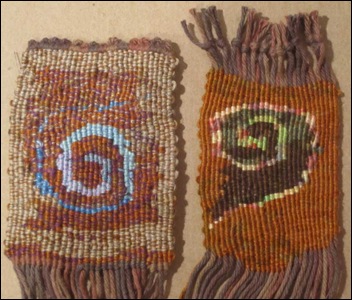 So with one board, a small box of pins, and some yarn, you can work on many pieces simultaneously….that may or may not be a good thing for me, I don’t need encouragement to start new projects before finishing the old ones. 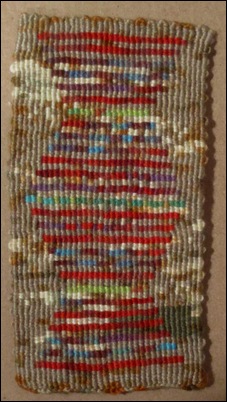 By the way, the sound board is very cheap, but I had to buy it at a real, old fashioned lumberyard. Neither Lowes nor Home Depot had even heard of it. It also sheds, and makes a big mess, so after the workshop I painted my boards them with 2 or 3 coats of white latex house paint (including all the edges). If you were really enterprising you could mark a grid on it too.

Even with a cartoon pinned underneath, I have found it difficult to make well defined shapes, especially vertical lines.

So I’ve been playing with simple stripes.  For the piece above I used a space dyed microfiber knitting yarn. LOTS of fun!  (3x6”)

It looks really cool on the back side too.

My latest project is TINY, only 1.5 inches wide. I’m using a linen warp, which I really like. It behaves very nicely, and since the warps are loose, there are none of the tension problems I have using linen warp on a floor loom. 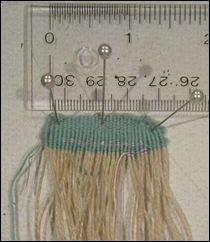 Although I understand how to do the knotting, I still can’t figure out how Anne achieves such perfect shapes and so much detail in her large knotted tapestries.

I guess it’s the same way you get to Carnegie Hall:

Hi Jan,
So where are the knots in knotted tapestry? Can you say a little more about the technique? Love your samples!

Haha, I thought someone might ask me that, and considered trying to explain it, but it's complicated. The knots are double half hitches, around each warp, but you don't see them cause they are between the warps.

It's kind of like making a friendship bracelet only you have separate warps and wefts instead of using wefts for warp. Hope that makes some sense?

Still a mystery, but that's ok!

I know. I'm sorry, it's not that hard, but a little too complex to try to explain it thoroughly on the blog.

I guess if enough people really want to know, they can beg Anne to do a workshop 8-)