On my last day in Taos, I woke up to a cloudy day, with high winds. I’ve never seen dust flying around like that before, and I was so tickled to see actual Tumbleweeds tumbling across the road!

My first order of business was to visit Taos Fine Art, just a block from the Taos Inn. I was lured in by the rugs in the windows, but once inside I found another treasure: Prints by Gene Kloss, (1903-1996) a renowned printmaker who lived and worked in Taos from 1925 to 1996. Her work is in many important collections, including the Metropolitan Museum of Art and the Smithsonian.  I fell in love with her drypoint etchings, particularly those that are inspired by Pueblo culture. 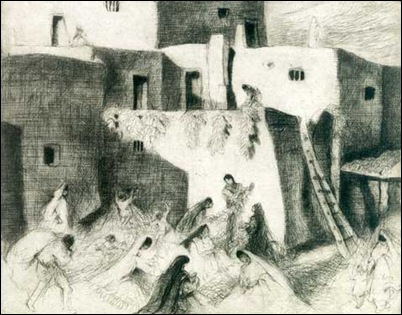 I was also quite taken with the color woodcuts of Gustave Baumann, (1881-1971). When I was getting my MFA in painting, I did an independent study in color woodcuts. It’s a medium that I’m familiar with, but I don’t see them very often.

I got chatting with the owner, and he offered to show me some very rare antique Navajo rugs. One was an exquisite child’s rug, mostly white and including designs made with white wool against white silk (unraveled from French underwear!). The other was the “Spider Blanket” in the picture below. Both rugs were beautifully woven, with very fine yarns.

According to Anthony Sobin, this rug was collected by J.K. Moore ca. 1865.  “He had been in the Civil War and, when mustered out, made his way to Wyoming.  He made a living by bringing salted Bison meat and skins (which were still relatively plentiful on the high plains), to the Four Corners area and would trade them for blankets and other items produced by the Pueblo/Apache/Navajo peoples which he would then trade back to the Blackfeet, Crow and Lakota people for more bison.” 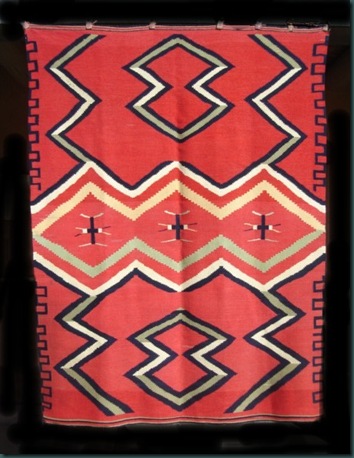 “He understood that this blanket was something special and rather than trading it, he wrote his name on it and kept it until his death, after which it found its way to us in the 21st Century through descent.
It is impossible to say for sure what the intention of this textile was but it is highly likely that it was ceremonial.  The presence of the small eight-legged "spider woman" crosses is not unusual but when combined with the major design element which is itself a huge, highly abstract spider, it becomes likely that is was a homage to Spider Woman, the mystical being who taught the Navajo to weave.”

“Two other such ‘spider blankets’ have survived and all three textiles use the same secondary colors, (golden yellow and sage green) in addition to the standard red and indigo colors of classic period Navajo weaving.  This is undoubted a woman's wearing blanket because of its size. It is a good educated guess that such blankets were viewed by their makers and their users as power objects--likely specifically for weavers because of the Spider Woman imagery.”

“When worn, the legs of the spider would envelop the wearer and if she were a weaver, would prepare her for the challenge of her next blanket and would hopefully imbue her with the power and skills of Spider Woman herself through the medium of the blanket.”

“The blue-dyed hand-spun wool is from from indigo obtained through French traders. The two reds were obtained by unraveling English/Scots red trade cloth known as Bayeta which used natural reds obtained from lac and cochineal from Mexico by way of Spain-- (the darker, browner red at the top of the blanket was dyed with lac--the lighter, bluer red in the lower part of the textile came from cochineal). The ivory is natural, home-spun Navajo wool.  The gold and green were raveled single-ply commercial yarns from undetermined European sources. It was probably woven close to the date of 1860, when the art of Navajo weaving was at its highest point. It was created by a master weaver and is an example of the very best extant Native American textile art which anticipated the optical and highly abstract forms of the mid-20th Century art of the Modern period in Europe and America.”

For more about these rugs and prints, check out Taos Fine Art.

I love those old woodcuts! Did you get a photo of the child's rug? It sounds great, too.

No, I didn't get a photo of the child's rug, but they might have one on their website.

I was nervous asking for photos and for permission to post them on my blog, so I didn't want to push my luck. They were very nice about it, though.