The Long Lost Chronicles of Angers

Finally, a year later, I am writing about my trip to Angers. I was intimidated by the vastness of the subject, so I procrastinated…now I can check it off my To Do list and put away some of the books that are cluttering up my coffee table! 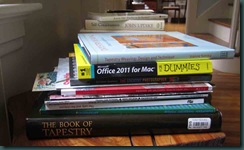 When my husband told me he had a meeting in Paris, in late August 2011, of course I was delighted to tag along. I wanted to see the Lady and the Unicorn tapestries at the Cluny Museum (which I wrote about here), and I had been meaning to visit Angers for a long time.

Angers is a charming city, in the Loire Valley, and the chateau is home to the famous Apocalypse Tapestry, the largest medieval tapestry, and one of the Seven Wonders of the Tapestry World. (I just made that up, but maybe someone should come up with a list!)

I was proud of myself for successfully taking the 2 metros to Gare Montparnasse in time for my TGV train to Angers. I find it stressful finding my way in a strange city, so I was relieved when my French tapestry friend, Marie-thumette Brichard, offered to meet me at the station in Angers. 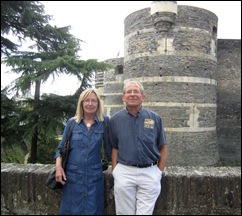 She and her husband, Jean-Michel, met me at the station, drove me all around Angers, bought me a museum pass and a delicious lunch. At the end of the day, they waited at the station to make sure I got on the correct train. It was so nice to be taken care of, and not have to worry about getting lost or missing my train! Thanks!

Our first stop was the Musée Jean Lurçat et de la Tapisserie Contemporaine. This museum is in a spectacular 12th Century Gothic hospital, complete with cloisters, storerooms and cellars. I assume that most tapestry folk know about Jean Lurçat who is credited with the 20th century revival of tapestry. The story goes that tapestry fell into a decline in the late Renaissance, when tapestry weavers were forced to weave exact replicas of painted designs provided by famous artists like Raphael. Lurçat believed that the art of tapestry could be revived by learning from medieval tapestries like the Apocalypse.

Lurçat was a thorn in my side for many years, as people quoted his strict rules, saying that tapestry weavers should never “copy” painting. Some people were upset with me for weaving tapestries that translate my paintings. Like any artist, I reserve the right to create my art based on what inspires me, not on a set of 50 year old rules. I almost forgave Lurçat after I saw Le Chant du Monde (the Song of the World), a series of 10 tapestries inspired by the Apocalypse tapestry, and woven in Aubusson from 1957-1967.

Each of these tapestries is about 4.4 meters high. The width varies from 2.26 to 13.6 meters. They all have a black background, with images in bright colors. The titles are The Great Threat, The Man of Hiroshima, The Mass Grave, The End of Everything, Man in Glory at Peace, Water and Fire, Champagne, The Conquest of Space, Poetry, and Ornamentos Sagrados.

The first 4 tapestries are dark and disturbing, dealing with the effects of nuclear war. The next 5 tapestries represent rebirth, humanity in harmony with nature, and human accomplishments. The last tapestry is somewhat of a mystery, as Lurçat died just before it was finished, and never got to write up notes about it.

(Below right: Water and Fire, detail) 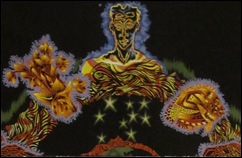 In The Conquest of Space, it’s interesting to see that Lurçat had the weavers use color blending in some of the wefts, a technique he had initially rejected as being too similar to painting.

At first I did not like these tapestries, something about the style repels me…the images are broken into small shapes that are very sharp, pointed and dangerous looking; but the more I looked at them, the more fascinating they became.  It’s a monumental project, and was financed completely by the artist. Standing in that enormous gallery with the tapestries all around me was awe-inspiring. 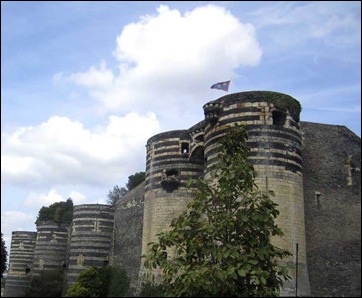 After lunch in an outdoor café, we visited the Chateau d’Angers, a beautiful 9th century castle overlooking the Maine river. It has a long and interesting history, but I was there mostly for the tapestry.

(below: less than half of the tapestry) 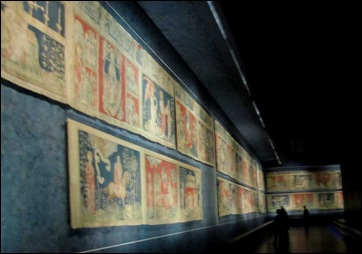 The Apocalypse Tapestry was commissioned by the Duke of Anjou, and woven in Paris between 1377 and 1380. The book that I bought in the giftshop, (The Apocalypse Tapestry of Angers, by Liliane Delwasse) says it was woven in the workshop of Robert Poisson. The Book of Tapestry, by Pierre Verlet, gives the credit to Nicolas Bataille, but Delwasse says he was involved as a producer (I think it was similar to being a producer for a Hollywood movie!).

(below: The Beast of the Sea) 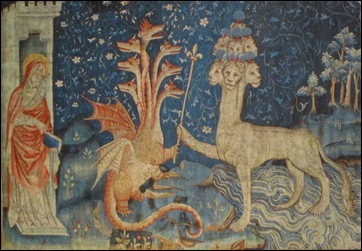 The narrative is based on the Apocalypse from the Book of Revelation by Saint John the Divine; it was a popular story at the time, a classic struggle between good and evil, and overflowing with angels, beasts and demons.  Below is my favorite scene,  “The Frogs,” in which we see Satan and the Beasts vomiting frogs. 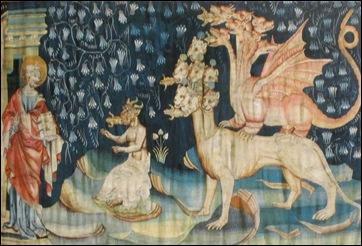 During the French Revolution, the Apocalypse Tapestry (like many others) was cut up and used for practical purposes, such as insulation, floor mats and the like. Luckily these fragments were retrieved and restored in 1848. The original tapestry was woven in 6 pieces, each 78 x 20 ft, and including 90 different scenes. The current tapestry includes only 71 of the scenes, and is in many smaller pieces, still a total of 104 meters.

They are very faded on the front, but the backs are still bright. The lighting in the custom designed gallery is dim, adequate for viewing but not for photography, so I apologize for the poor image quality.

Both the Chante Du Monde, and the Apocalypse Tapestry are enormous subjects, and I can only give you a little taste. If you follow some of the links you can find more information. The best source I have found is the book sold at the chateau. Good luck finding it….I recommend a  pilgrimage to Angers!!!

Here is a superb video of the Apocalypse Tapestry.

I'm glad you found the lost chronicles! I know how you feel about Lurcat and about the 'rules' he imposed on tapestry. He brought back the medium, for which I am grateful, but I am also grateful that I can do it my own way.
His work is very intense. And it looks like what you saw ther in Angers was intense. I can see why it took awhile to process it.

I saw the Lady and the Unicorn the day before, so I was completely saturated with amazing tapestries!

There is so much to do in Paris, but it's worth it to take a day to visit Angers; I'm glad I did.

Thanks for the tour. Some day I hope to follow in your footsteps......

So cool! Thanks for sharing

I'm so thankful that you decided to write about your trip to Angers Jan. Fascinating and enjoyable! I had to smile when I read your account of Jean Lurcat as I have often thought that his rules were limiting, but the tapestries speak for themselves.