Thanks, it’s an honor!

To be accepted as an Elected Artist member of the Art League of Rhode Island.

The annual meeting was at the historic Aldrich House, in Providence, on June 21st. The five new members were invited to each bring a piece of their art to be put on a lovely wrought iron  easel. I brought Chaos (don’t I always?) 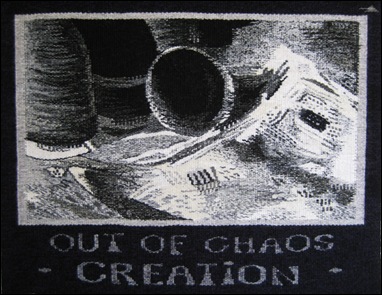 The new members were introduced during the meeting. It was exciting to meet the other artists, and it turned out not to be at all intimidating, as everyone was very friendly.

ALRI was founded in 2000 by a group of about 40 artists, and provides exhibitions for member artists in all media!

As a tapestry artist I appreciate this open-mindedness, as some arts groups are not so inclusive. Rhode Islanders are far more informed about the textile arts than people in other regions, and my theory is that this is the result of growing up with Slater Mill, the birthplace of the American Industrial Revolution. Every child in RI visits there at least once on a school field trip. In addition to this, the Rhode Island School of Design, with their excellent Textiles department is very prominent here. 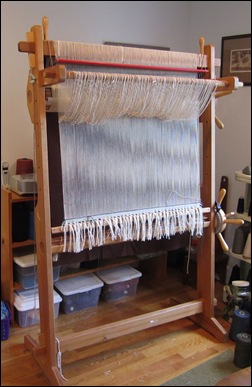 The 2012 Annual Exhibition will be opening on August 31.

More information about that later.

In the meantime I need some new tapestries to exhibit!

Time to leave the computer and get back to my looms!

Congratulations, Jan, and well deserved. I hope your association with the other artists is as encouraging an experience for you as I know your inclusion will be for them!

Way to go, Jan, they are very fortunate to have you as a member! I will be so interested to see how this affiliation affects your work. My husband & I are considering moving to a small town in Oregon--Hood River--where there is an arts organization similar to the one you now belong to. We took a trip there recently to see the area & I made sure to visit their permanent gallery space where I saw some fiber art, but no tapestry. While the thought of moving is scary, the thought of having the opportunity to join a group like that is pretty exciting. Good luck, Jan... let's keep spreading tapestry far & wide!

Thanks! I have lived in RI for 28 years, and always knew there was an active arts community here, but it's only the past couple of years that I have made the effort to get involved with it. I am really enjoying getting to know other artists, and I am astounded at how many exhibits there are. I really need to get some more tapestries woven!!