Since so many people have been asking me  about the Tapestry Diary, here are some links from previous blog posts.

There are some other short mentions of the diary in other blog posts from 2010, but these are the ones with the most information.

Basic Plan: 14 inches wide, the finished piece is more than close to 5 feet long. I wove a small parallelogram every day, about 1 inch tall and 1.5-2inches wide. They started out abstract but soon I began including text and sometimes small images for special days. I used the diary to experiment with techniques, textures, colors and shapes. Every month had a color scheme.

If I was away made up the days when I got home, sometimes weaving an entire week as one entry.

I kept it spontaneous, and rarely thought about what I would do until I was sitting at the loom. I kept a small sketchbook next to the loom and occasionally I did a small sketch first.

January 2010 – Starting to weave the days 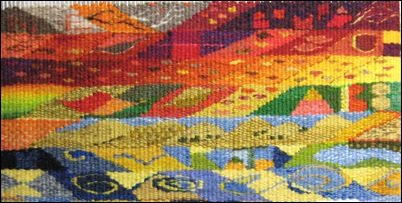