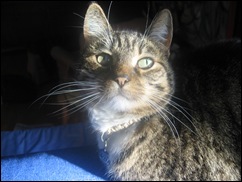 Xerox was the best kitty ever. She was always gentle and loved sleeping on our laps. She never peed anywhere she should not have. She never climbed on the kitchen counters, never mind stealing the chicken that was defrosting on the counter like other cats!

She loved to be outdoors, at least in warm weather, but never had a flea! Apparently she was immune. We should have cloned her. She was an incompetent hunter and never caught anything but crickets until she was 8 years old and accidentally cornered a chipmunk. 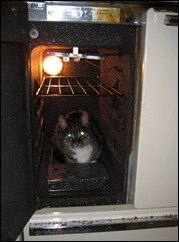 Then she would occasionally leave us a mouse or chipmunk that was completely intact, just dead. I think she played with them til they died of fright. She only weighed 6.5 pounds, so even in old age people assumed she was a kitten.

She was an expert at sneaking into closets, attics, or anywhere else that was behind a closed door. You’d open the door briefly and never see her sneak in, then 12 hours later you’d wonder “Where could Xerox be?”  The most impressive was her recent venture into the warming oven! 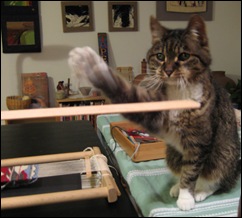 It’s hard to get used to being catless after 16 years and 8 months (actually we had 2 other cats before, who lived to be 16, so it’s more like 32 years). I keep looking around to make sure she’s not hiding in my studio before I close it up. I imagine I hear her calling me from outside the kitchen door, or asking me to put water in the bathtub.

Yes, she loved drinking out of bathtubs and sinks.

About 4 months ago she suddenly went blind. It was obvious when she started walking into walls. 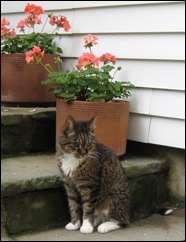 Blind cats also vocalize, which is a bit different from the usual meows. More like AAARROOOL. When she went blind we discovered she didn’t hear very well either. The vet told us her retinas had detached and were all folded up, possibly due to kidney disease or high blood pressure.

She still seemed to enjoy life until last Thursday, and we enjoyed her company so much.

We miss her terribly.

I am so sorry Jan. i still miss captain jack and he died a little over a year ago. One just gets terribly used to having them around. I keep looking for Jack and sometimes think he's still around. I am sure you'll feel the same about Xerox. What a great name.

The name came from our then 11 year old. Xerox had an almost identical sister named Stripe (for the stripe on her nose) who died young. After that we liked to joke that we had lost the original and only had the Xerox.

Sorry to hear about Xerox. We just lost our cat Chloe last month who was 15 years old. One day she was fine, the next very sick. She had renal failure. She was a very loving cat too, but only had 3 legs due to getting hit by a car when she was about a year old. We adopted her when she healed and was amazing. We miss her yowling. I can empathize with you on losing a loved companion.
Megan

Sorry you lost your kitty too. I think renal failure was Xerox's problem too. She used to drink a lot and pee a lot, then suddenly her litter box was dry....hmmm, very suspicious. It's common in cats. It's so hard to get used to her not being here, I'm always looking around for her, and still carefully close doors to keep her out of the basement, the studio and all those other places she was not allowed!