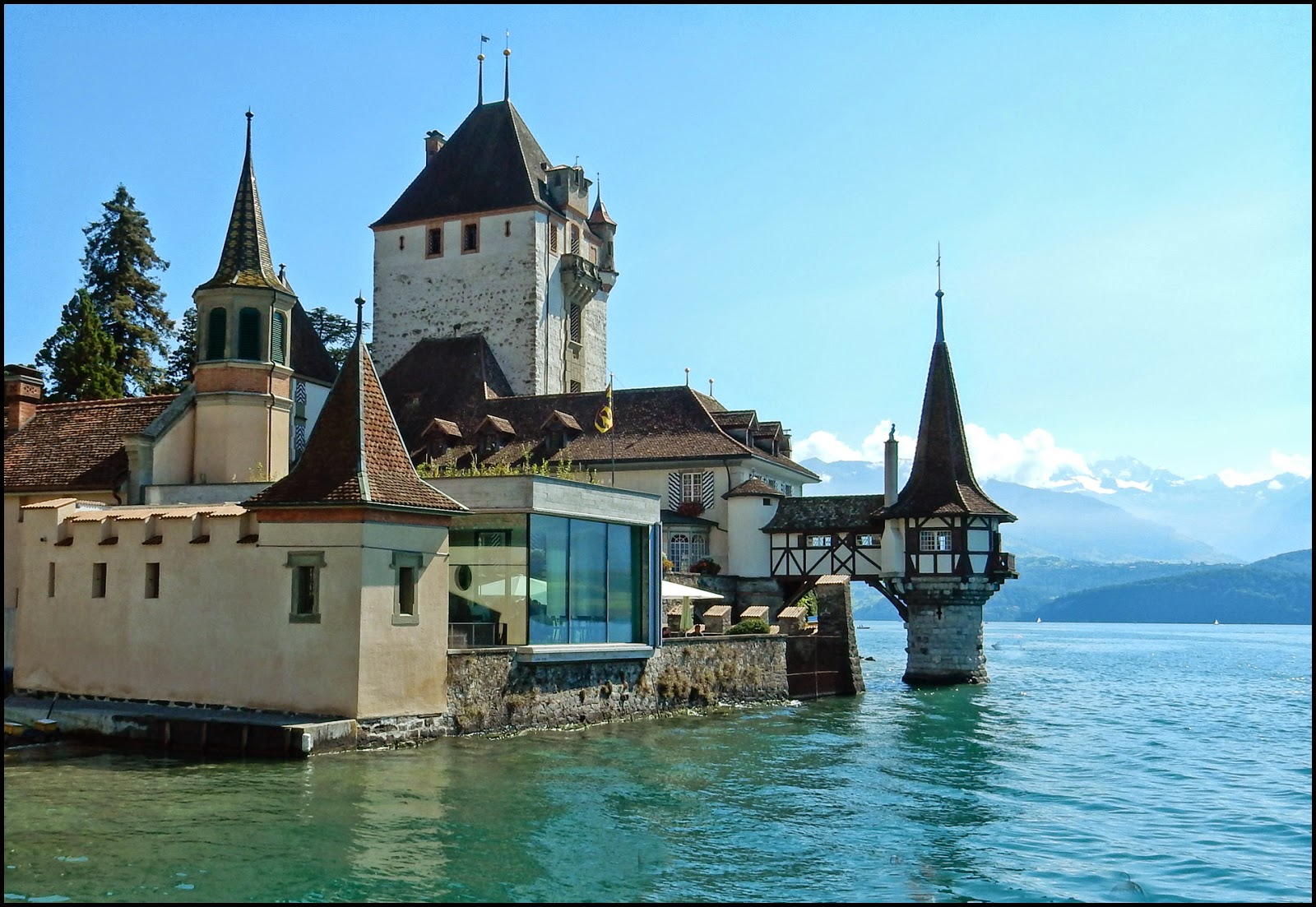 I visited Thun castle in 2000, with my husband, in-laws and kids, but I don't remember seeing any tapestries there.

A few weeks ago my Swedish friend was visiting and we decided to take the lake cruise to Thun, stopping off at Schloss Oberhofen on the way. It's an adorable little castle right on the lake. 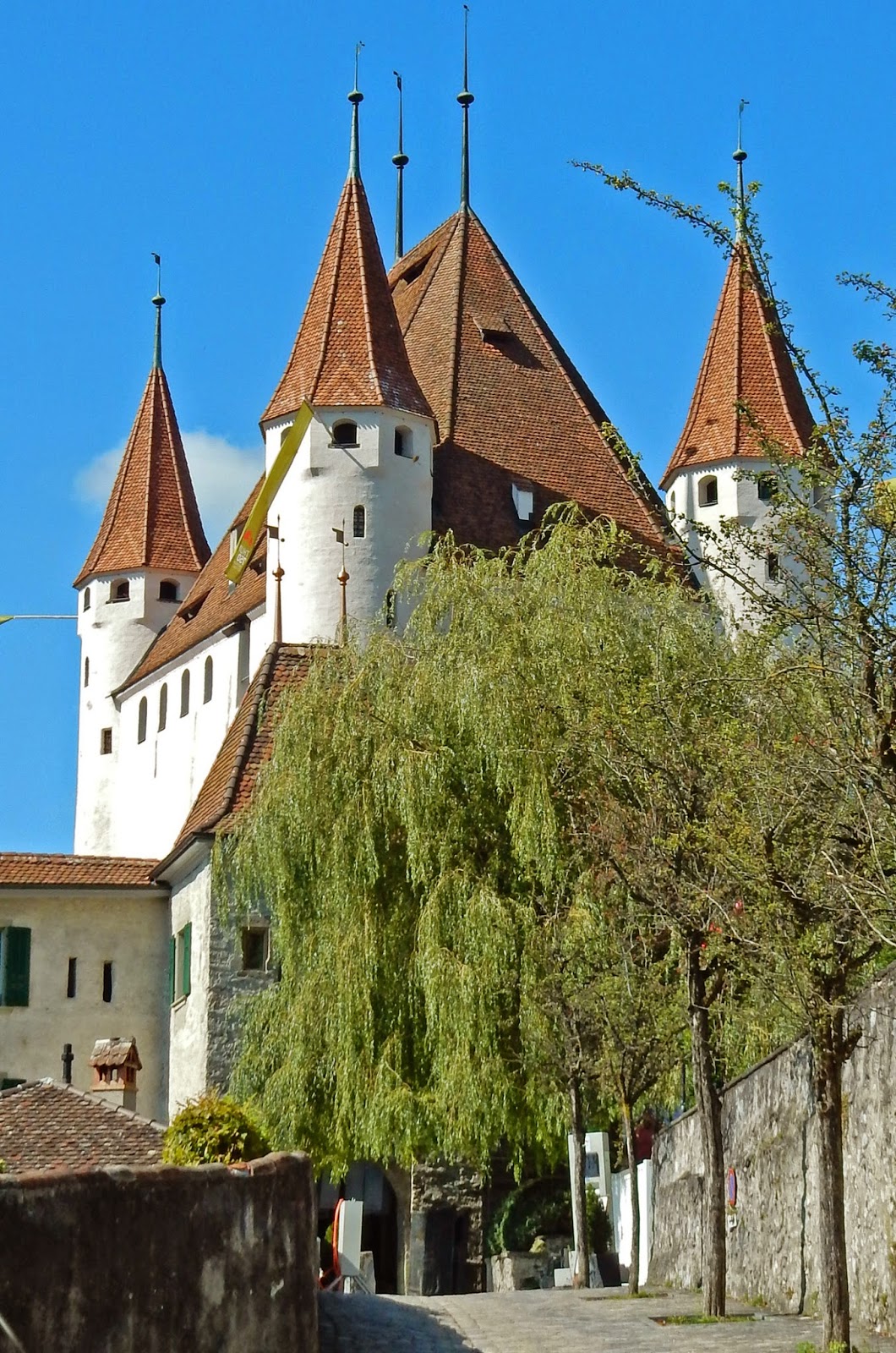 Arriving at the larger and more impressive Thun castle, we discovered that it has been modernized, with spiffy new galleries to exhibit various collections. Most of the time, I would rather just see old castle walls, but in this case, I was pleasantly surprised to find three different tapestries.

The first was a part of the spoils of the 1476 battle of Grandson, where the Swiss defeated Charles the Bold (also known as Charles the Rash), the last Duke of Burgundy. 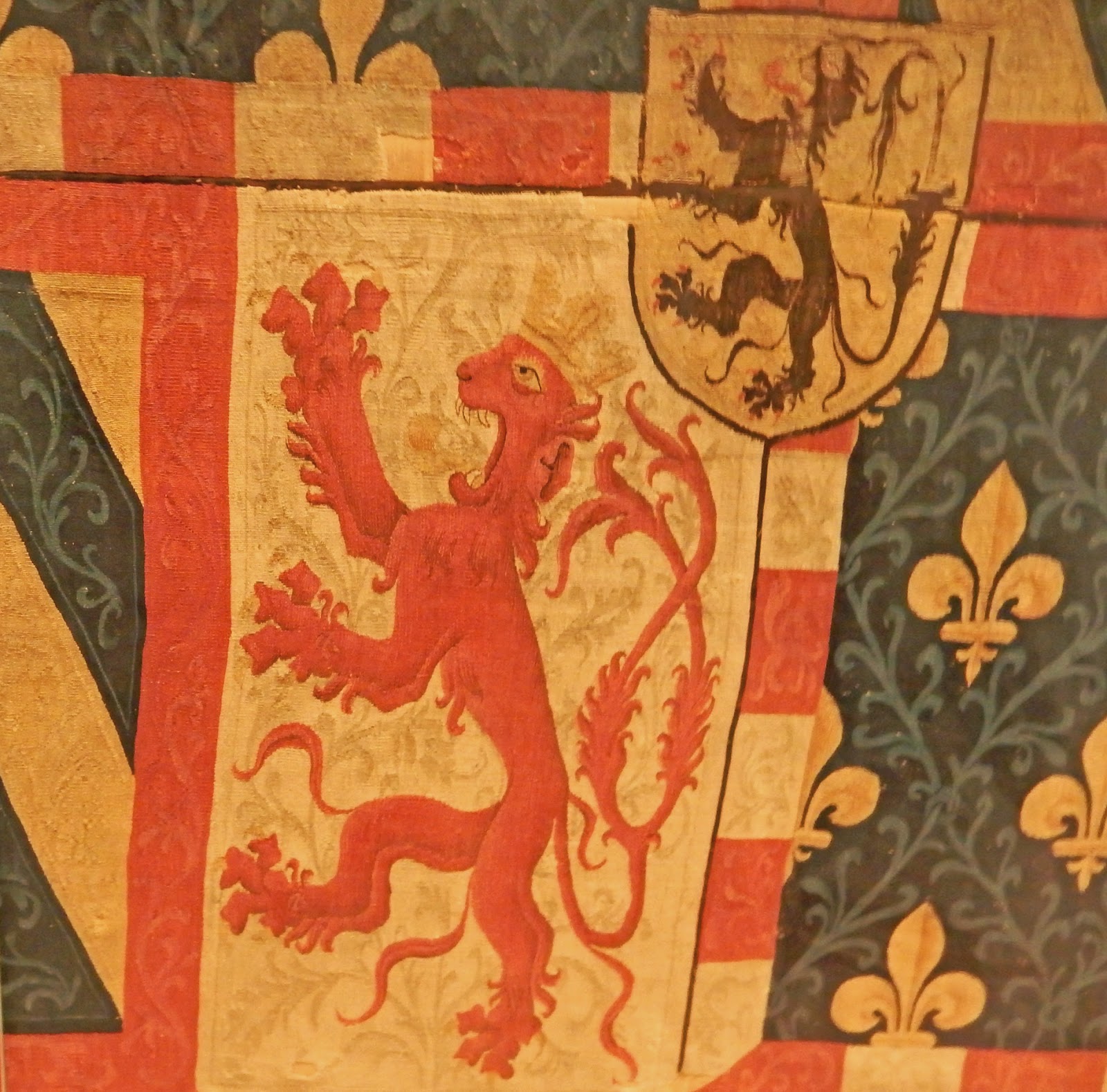 Charles carried treasures of gold, jewelry and tapestries with him to the battle, and the so called "Burgundian Booty," was divided up among various museums in Switzerland.

The most famous are the tapestries at the Historical Museum in Bern, woven in Tournai. I have tried to see them twice, but always seem to arrive when the gallery is closed. (I'll try again soon) You can read more about them on a previous blog post here.

NOTE: click on the images to see them larger.

The tapestry at Thun castle is a very large fragmented piece which is mostly heraldic. I did not find it all that interesting. 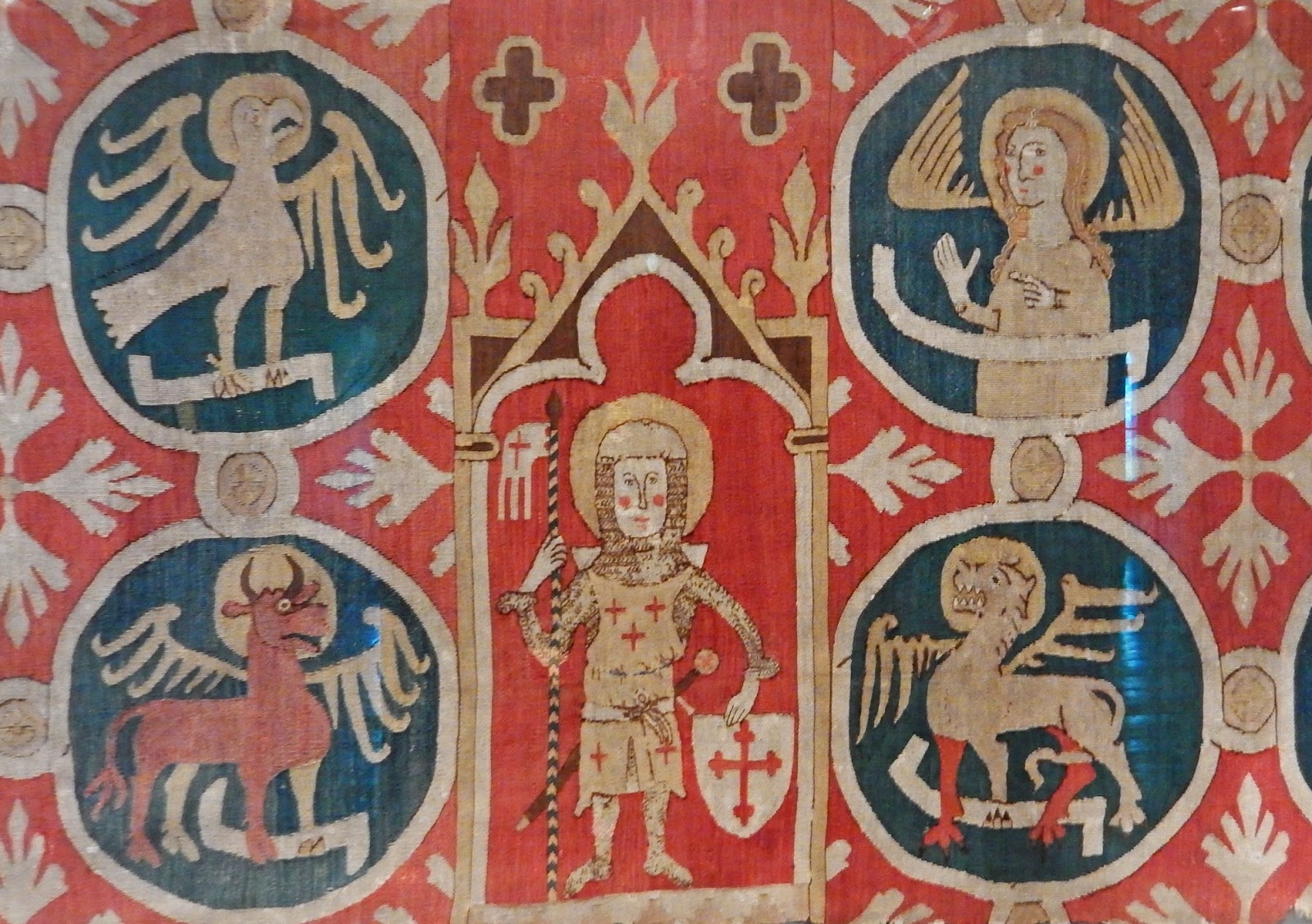 One thing I love about tapestries in Switzerland, they always seem to be framed under glass, so I can get as close as I like without any alarms going off! 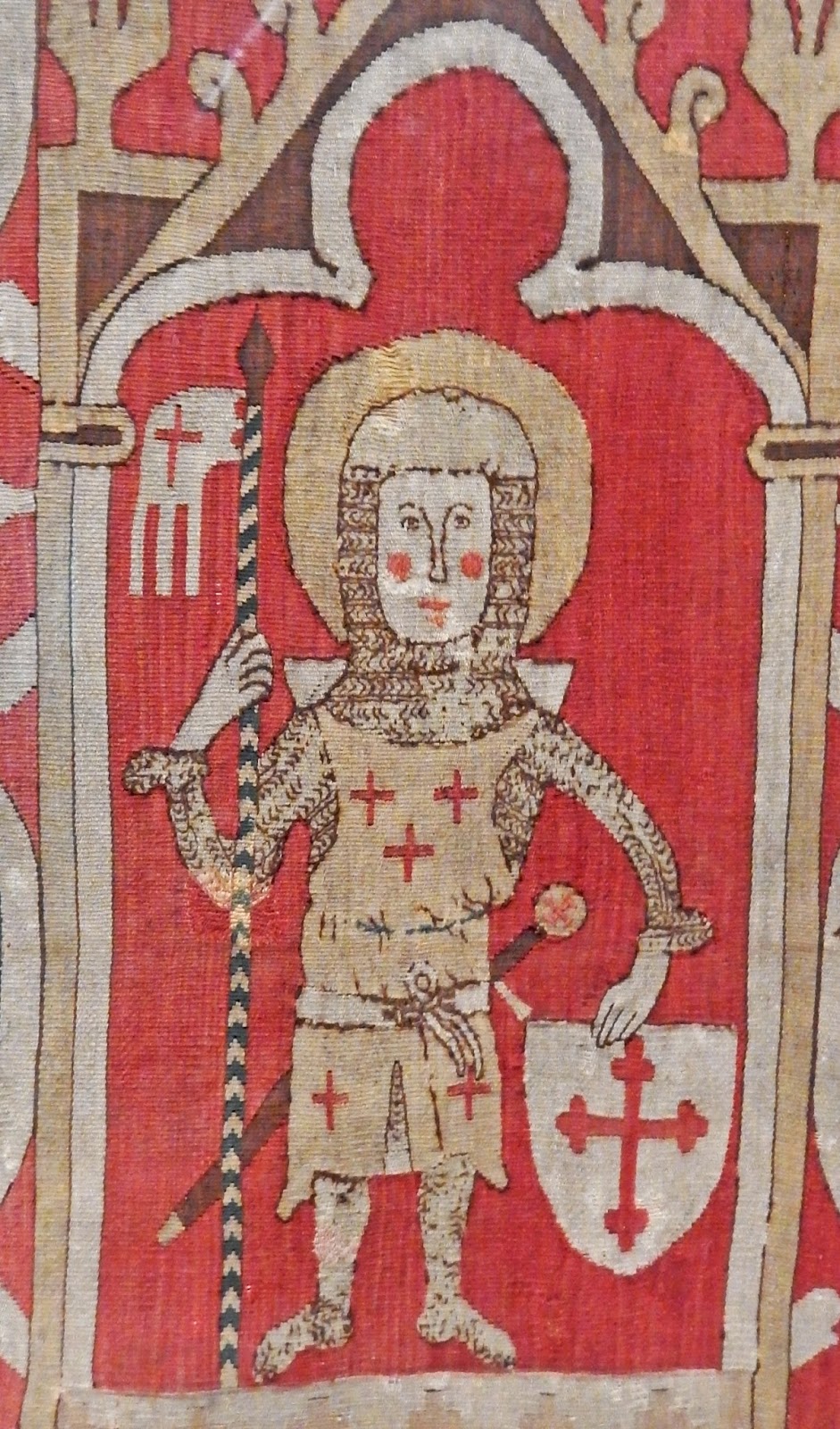 Photographing through the glass is a bit tricky though, and flash is not allowed, so please forgive the quality of the images.


The second tapestry at Thun Castle is the "Medallion Tapestry," woven in Switzerland in the early 14th Century. Like many Swiss tapestries of the period, it was used on the front of an altar.

The central figure is St Maurice, the patron saint of Thun. Around him are medallions of symbolic animals (including those that represent the saints Matthew, Mark, Luke and John) 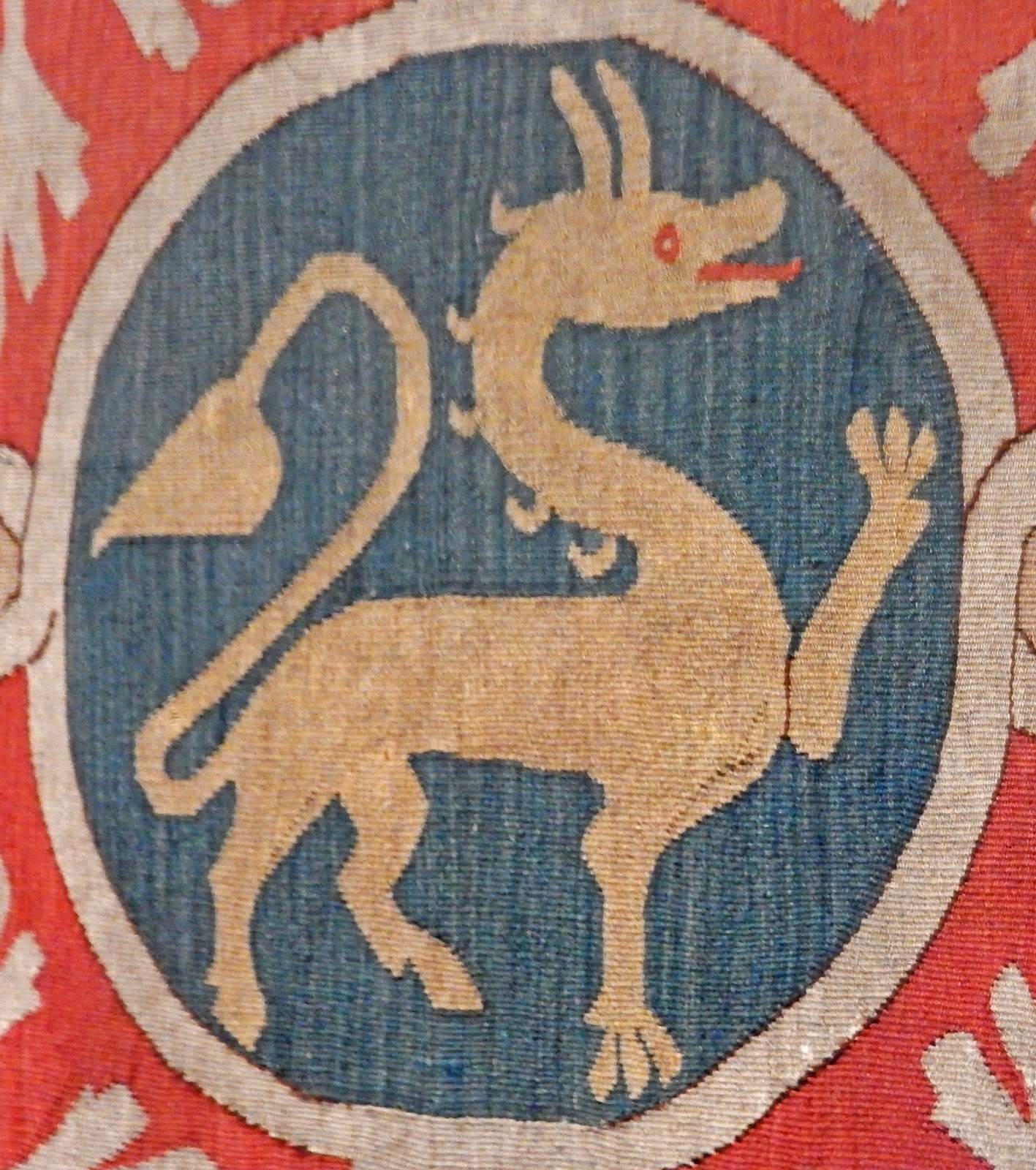 This medallion is a combination of dragon and horse, with a lion's tail.

At first I thought it was a griffin, but when I looked it up, I couldn't find any imaginary animal with these attributes.


The third and most fascinating tapestry at Thun Castle is the "Crescent Moon Madonna." Woven in Basel, 1425-1440, it represents the Virgin Mary with the Christ Child, standing on the crescent moon in front of the sun. 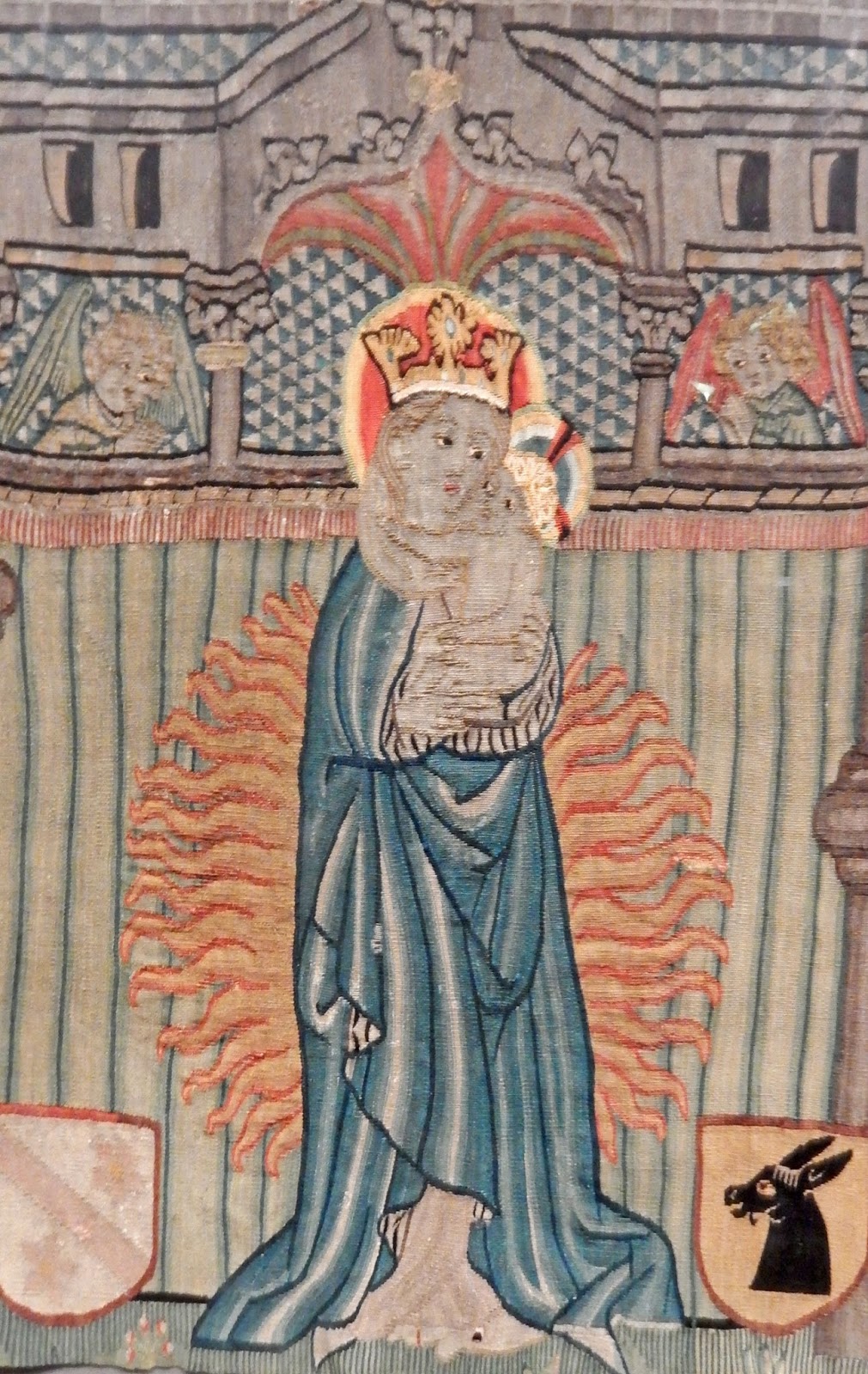 This tapestry was donated to the Scherzligen Church in 1450, by Anna von Velschen, the wealthiest woman in Bern, in memory of her husband, who had been mayor of Thun before dying at an early age.

Apparently the gift would guarantee him eternal salvation.


I assume that it is his face we see sticking out from under the Virgin Mary's dress? 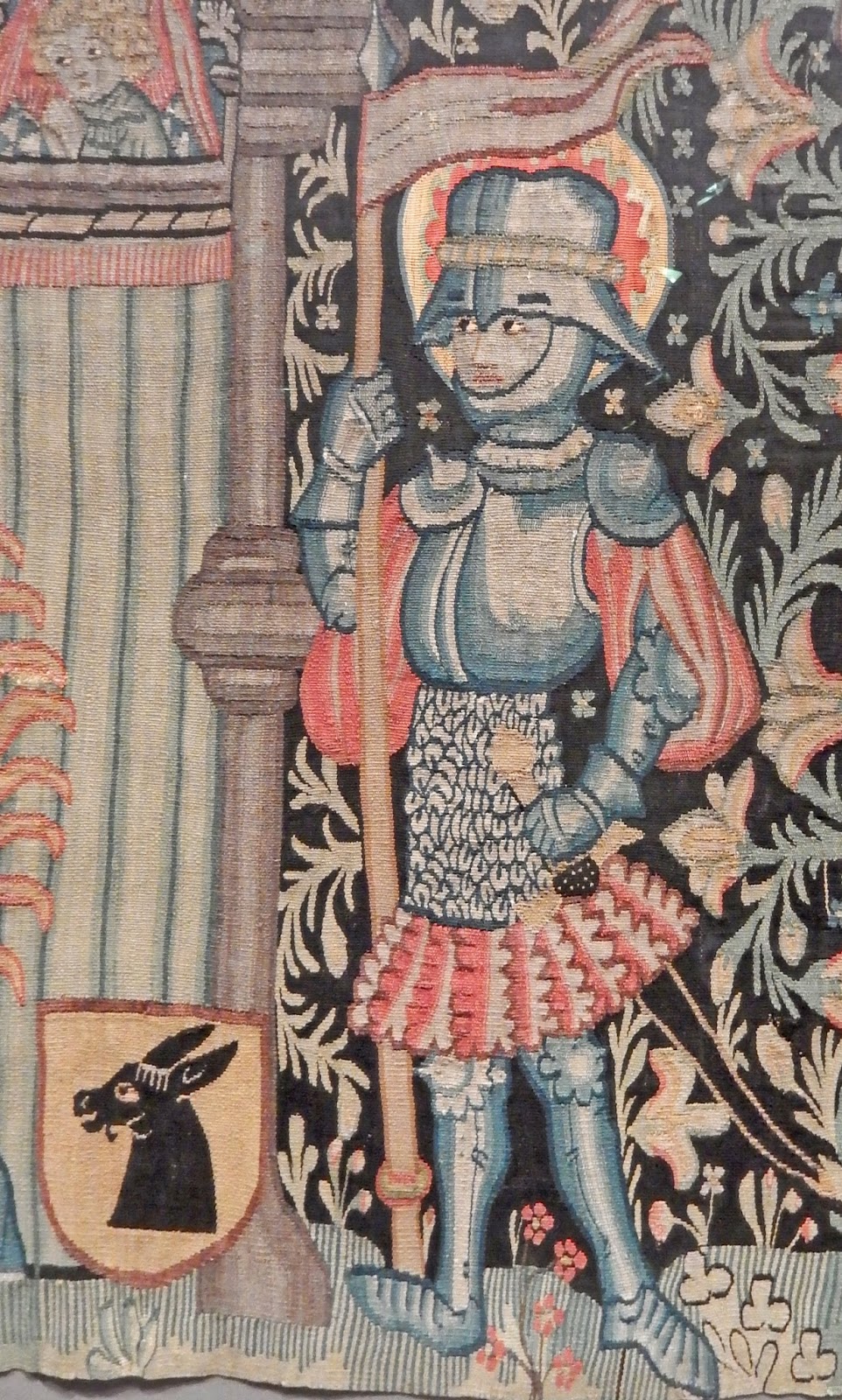 I find the weaving style to be charming, the facial expressions, the way the hair and textiles are woven, the lack of perspective (particularly in St Maurice's feet, which look like they are on the wrong legs!)

St Maurice in full armour, next to the Van Velschen coat of arms. 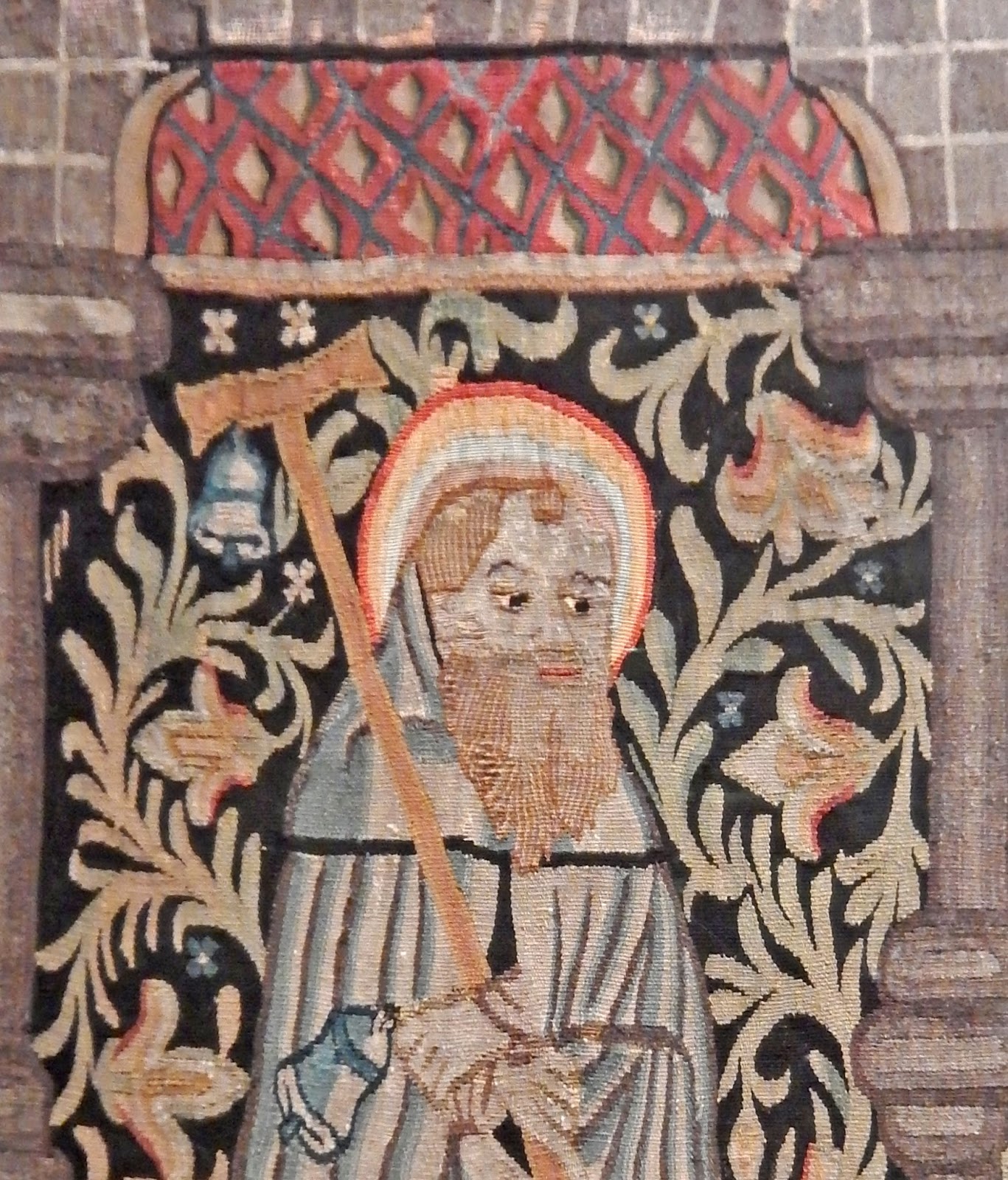 St Anthony, the hermit, with his staff and little bell. 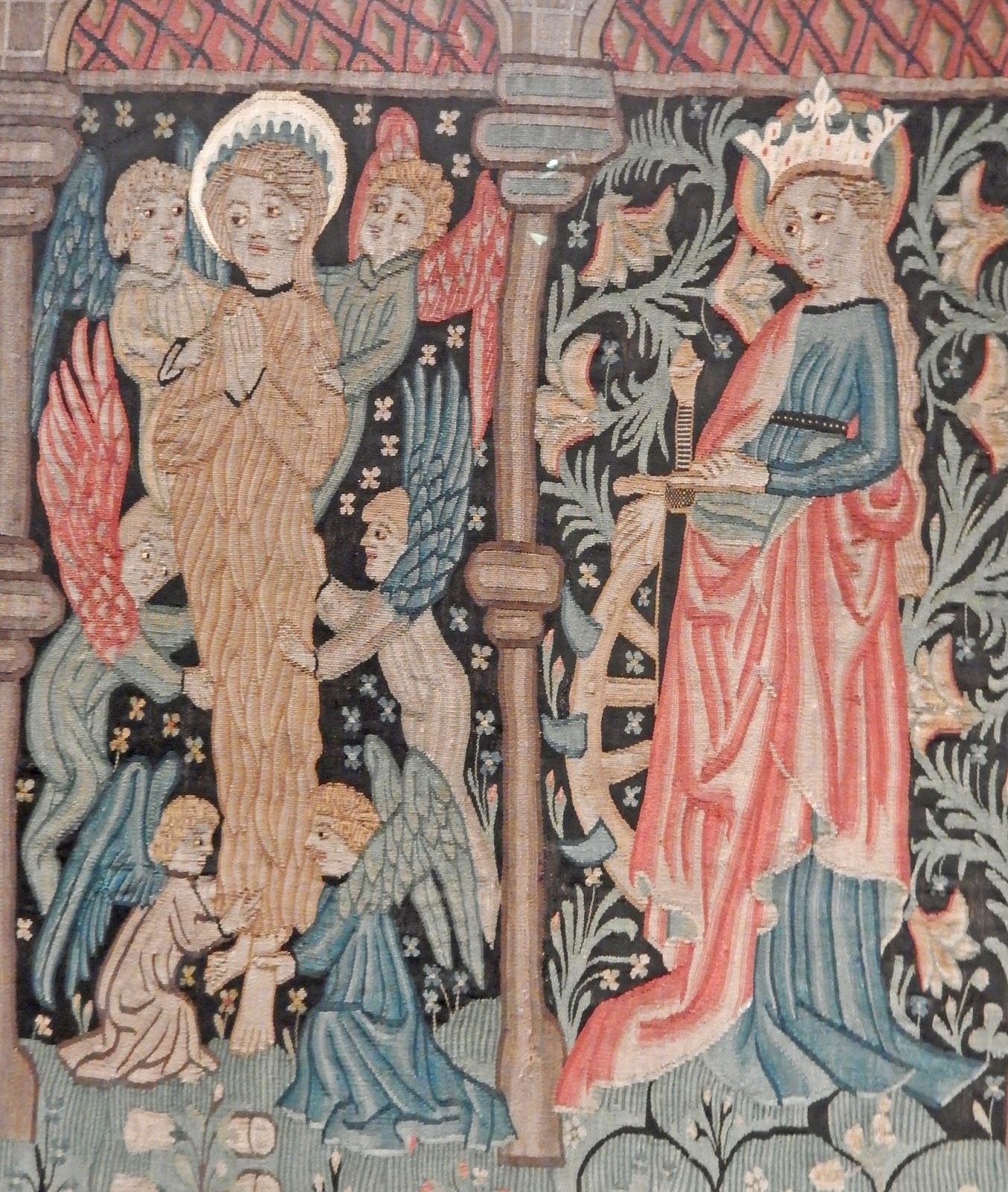 Mary Magdalene, on the left, with angels lifting her up. It is common for medieval representations of Mary Magdalene to show her naked but covered in long hair. According to legends, she was sustained in the desert by angels who lifted her up and fed her manna from heaven.

On the right is St Catherine with her crown, sword and martyr's wheel.
Posted by Jan at 3:53 PM