On Saturday, March 2, I attended a meeting of the Surface Design Association, Massachusetts/RI chapter meeting at Artworks in New Bedford.  It was well attended, and I enjoyed meeting about 15 fiber artists, working in many different fiber media. 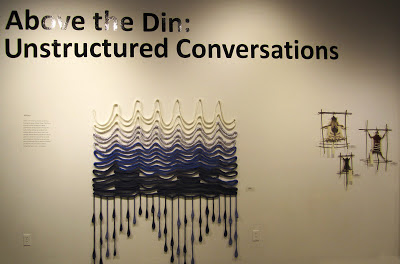 After the meeting we had a sneak preview of the exhibition in the Artworks Gallery, then walked a few blocks to the New Bedford Art Museum to see Elin Noble: Color Alchemy.

Unfortunately photography was not allowed at the museum, but I'd just like to say that her hand dyed fabrics glowed with an inner light, like stained glass.

The exhibit at Artworks is "Above the Din: Unstructured Conversations."

The artists are Adrienne Sloane, Nathalie Miebach, Ruth Marshall, Nancy Crasco and Beatrice Coron.  Four of the artists participated in an artist panel at the museum, along with Elin Noble.

Nathalie Miebach uses scientific data,  as the basis for her creations. She hopes to lure viewers into complexity through play, using the language of toys. Below- A Duet of Blizzards - Wood, Paper, Rope, Data. 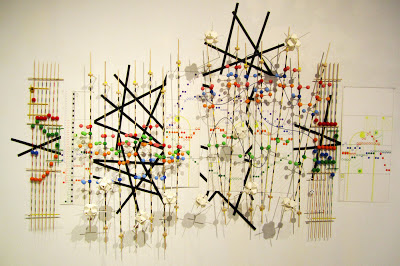 "This score is written for 2 musicians. In this score, weather data (barometric pressure, temperature, dew point and wind) of two different blizzards, in December 2007 and February 1978 are translated. Both storm systems caused havoc on roadways in New England as people tried to leave the city, but found themselves grid-locked on highways as the snow slowly buried them."

Beatrice Coron works with cut Tyvek. Below: On the Nile (Detail) 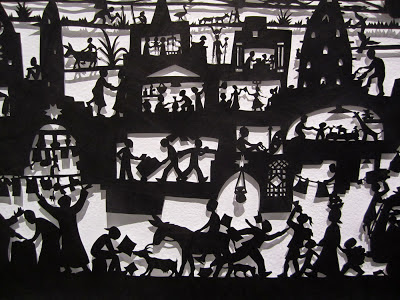 I love the expressive human (and animal) figures, and the shadows that add another dimension to this piece.

Nancy Crasco is concerned with climate change. Her work shows that the earth is still beautiful, and at the same time, it provokes viewers to ask questions. "Weed War."  (below) Silk Organza, printed with gelatin plate process, hand painted and machine embroidered. 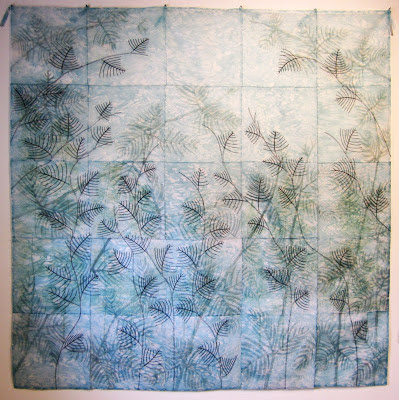 Ruth Marshall worked at the Bronx Zoo (home of the Wildlife Conservation Society) for 14 years, where she developed a passion for protecting endangered species. Using actual animal pelts from the zoo's archives, she charts the patterns to create her handknitted "pelts."  Below - #2 Ocelot 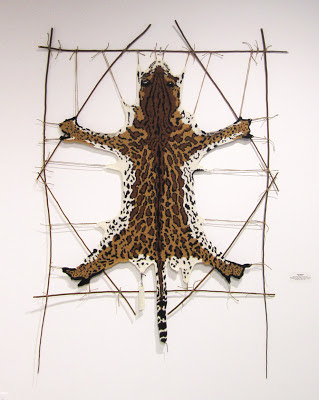 Adrienne Sloane is a sculptor who says she has fallen into a knitting hole and can't get out.  Her "Walking on Eggshells," (below) is knitted with wire. The organic shapes are beautiful, and once again, I found myself admiring the shadows. 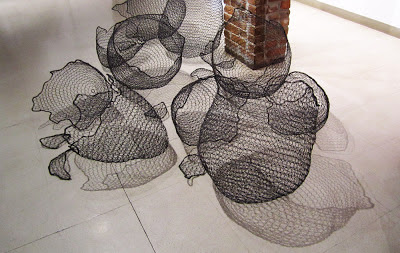 "A Nation Divided," (below) is a commentary on the current dysfunction in our government. Sloane had postcards of this piece printed up, and mailed one to each member of congress. 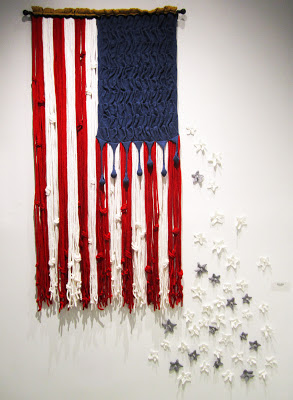