Weaving a tapestry diary has given new meaning to the New Years holiday.  Instead of making a resolution that I feel I SHOULD do, I have a plan for what I WANT to do, and actually WILL do for the entire year.

I got the idea from Tommye Scanlin, and my first tapestry diary was in 2010 (left). It amazes me how 365 very small daily entries can add up to something so substantial!

I decided to weave a row of 7 parallelograms each week, because with that shape, you don't end up with a slit between each day like you would if you wove a square. I had woven some small tapestries like this in the past, just as playful exercises, and they came from my habit of using lazy lines.

Lazy lines occur when you break a solid area of color into smaller diagonal areas, but because all the parts are the same color, it's very subtle, as you can see in this image (right).

In my parallelogram tapestries....WAIT!
I am really tired of typing that word, even though I'm proud that I can now spell it....can I just call them p-grams from now on?  OK! 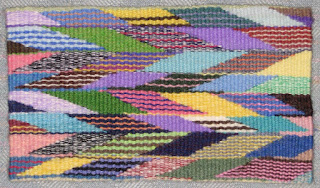 In my p-gram tapestries I wove a stripe of diagonal shapes all the way across for about an inch, then started a new stripe in different colors. Some of the parallelograms also include thin stripes.

My 2010 tapestry diary was based on this design.

One of the benefits of my tapestry diary is that I make rules, and that takes away the intimidation and uncertainty that can keep me away from my studio, allowing me to make a really simple choice each day. It's a great way to get myself into the studio.

So my rules for 2010 were:
1. Choose a color scheme for each month
2. Change direction each month
3. Weave every day, unless I can't
4. If I miss a day or more, make it up later
5. When I feel like it, weave an image or text relating to special occasions
6. I make the rules, so I can change them or break them

Along with various birthdays and other events that I wove, here I am in my kayak from May 2010!

Every day, I would sit at the loom and weave what I felt like weaving, without over-thinking it. After all, if I didn't like that one small p-gram, it was only one of 365, so no big deal.

It became a daily weaving practice that was all about the process and not about the product. I enjoyed it so much that I remember, near the end of a day that was not going well, I suddenly realized I had not yet woven my diary, and it made me so happy to know I had that to look forward to.

Detail of August and September 2011 (below)

As the year went on, I realized that the repetition, and yes, boredom, of weaving the same thing every day drove me to experiment and explore, to seek out challenges, so the final product is a treasure trove of new ideas for future reference. As a mother, I always felt that boredom was necessary to encourage children to develop their creativity, and I can see that it works for adults too.

September and October 2010 (below)

At the end of 2010, I didn't want to do another tapestry diary right away, so I did a sketch diary instead. That only lasted about 5 months, as I found it more difficult than the tapestry diary, but it was really worthwhile. I drew a lot of moon snail shells. Read about it here. 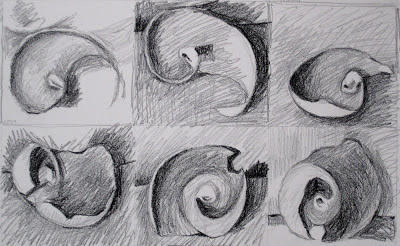 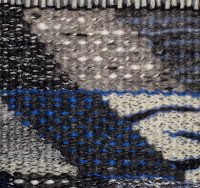 For my 2012 Tapestry Diary,  I used the same basic rules, but I made my p-grams steeper (by turning on the same warp twice instead of once), I used thicker yarns, and instead of noting special dates, I had a mission: to explore adding color to the black and white which I have been using so much in my recent tapestries.

I used a loom that could only fit enough warp for 6 months, so I had to cut off and restart on July 1. At that point, I decided to weave the 2nd and 3rd quarters of the year as separate pieces, because, as a finished tapestry I prefer that shape, and because I was starting to love the way they looked, and to see them as possible tapestries for exhibition. So much for process vs. product!

That happened because, once again getting bored weaving the same shape every day, I discovered that I could break my p-grams into 2 matching triangles, or into 3 triangles...and from there the shapes morphed into waves, and leaves and half moons. 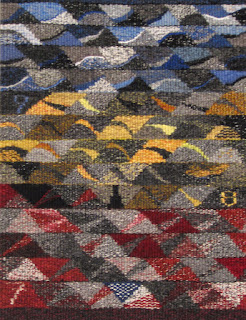 So on New Years Eve, I wove the last p-gram of 2012, then I wove the hem, and cut the last 2 quarters of the year off the loom.

As much as I love the way the 2012 diary turned out, 2013 is going in a new direction because the diary has to be about exploring new territory!

Who knows where it will take me! 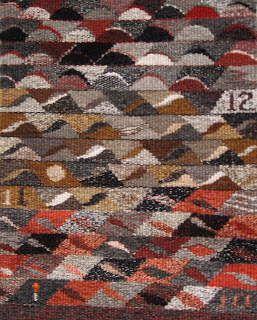 Here are some links to previous blog posts about my tapestry diaries:

May 2012 with links to earlier posts

Jan, I do love how these turned out! I have to admit that I want to really love a finished product, if I am to spend time and materials on it. That's why I just sketch daily instead of taking on a tapestry diary, but your diary's are works o art! I can hardly wait to see what this year brings.

This is an inspirational post Jan. Your diaries stand on their own as exciting work and I enjoyed reading about your tapestry diary history. I am sure the new year will be exciting to follow.

I really enjoyed reading the progression of your thinking and doing of your Tapestry Diaries. I found your rules very good. We have to have some limitations or we'll be all over the place, of course we can always change the rules too as we see fit:) I just love what you did in 2012 and learned a great deal from your exploration. I'm interested in seeing what you do in 2013!

What an inspiring post. Your tapestry diaries are so beautiful and I love the way they took on a life of their own as you tried different things.

Thanks, everyone. This has been such an exciting project for me, and I'm glad that others find it inspiring too.

Hi,
Will you please post a link to your Blog at The Weaving Community? Our members will love it.
It's easy to do, just cut and paste the link and it automatically links back to your website. You can also add Photos, Videos and Classifieds if you like. It’s free and easy.
Email me if you need any help or would like me to do it for you.
Please feel free to share as often and as much as you like.
The Weaving Community: http://www.vorts.com/weaving/
I hope you consider sharing with us.
Thank you,
James Kaufman, Editor

Thanks for the invitation, James. I posted a link.