No More Homework, No More Books

My last tapestry class finished up a few weeks ago, so I guess it’s really summer vacation!

I’ve had a total of 14 students since January. The classes were 2 hours a week for 4 weeks, and were planned that way because people have a hard time committing to more than 4 weeks at a time.

After the initial 4 weeks, most students opted to do another 4, because there is so much to learn.

It sounds like a cliché, but it’s really true: I did learn as much as the students.

For example, because it’s so difficult to weave a circle (and on these looms they only have 24 warps to do it on) I discovered it makes more sense to try a half circle first!

I’m looking forward to next fall when I can plan some more classes. 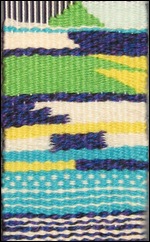 The hardest part is scheduling. Everyone has so many other demands on their time.

Here are some photos of tapestries by the students in my last class. 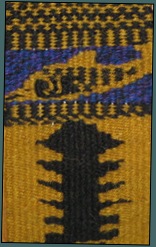 All are samplers, in which students practiced weaving the basic shapes, rectangles, triangles and curves, plus stripes, pick and pick, and hatching.

The detail on the left includes an ancient Coptic dolphin.

Can you see it?

Technorati Tags: Tapestry Weaving,Tapestry Classes
Posted by Jan at 12:06 AM