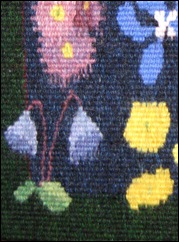 While we were in Switzerland, Kim made me a lovely frame loom, so I could weave a tapestry for Enchanted Pathways, ATA’s upcoming small tapestry unjuried exhibit.  It will be at the William and Joseph Gallery, Santa Fe, NM, July 10 - 31, 2010, during Convergence.

After I finished weaving my entry, “Mille Fleurs Minus 978,” I had the whole back side of the loom left, and really did not want to waste all that warp, so started weaving a tapestry from a photo I had taken.

This is the photo. It’s taken at the top of Castelgrande in Bellinzona, in the Swiss canton of Ticino, near the Italian border. 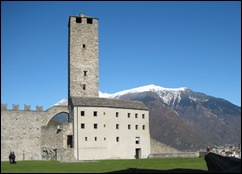 We were walking along the street and saw a huge rock down an narrow alley. Inside the rock was an elevator, which took us to the top of the rock, which has an ancient castle on it. What an amazing surprise!

Now I have to finish it so I can cut off Mille Fleurs Minus 978 in time to mail it to New Mexico in a few weeks.

I remember the musical “You’re a Good Man Charlie Brown,” in which my daughter played the role of Schroeder, and her pal Cait played Charlie Brown, who sings a song about a book report:

“I work best under pressure,
And there'll be lots of pressure
If I wait till tomorrow…”

That’s me……here I am in a hurry again!

Ah, yes! But at least you do have the tapestry for the exhibit done... which I do not. I HAVE left it for tomorrow! The castle would also have been wonderful for the Enchanted Pathways exhibit. Especially with your story about it.

How wonderful that you were able to weave on your trip! I agree with Kathy - maybe you will want to send the castle in for the exhibit also!

Oh yes, I have had that thought, but my entry form says "Mille Fleurs Minus 978," which would be a very strange title for this one! Once upon a time I changed my mind, but since the two were similar, the title could go with either one.