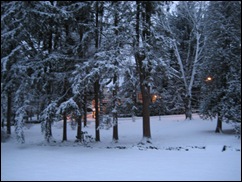 It’s been very snowy the past week, and since our daughter Zoe, and her husband Jason were visiting from California, I’ve hardly been out of the house. 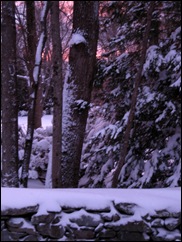 Also, our traditional Canasta tournaments but this time, alas, I was NOT the Master of the Universe.

Inspired by Tommye Scanlin, I had decided to begin a Tapestry Diary for 2010.

The loom I wanted to use was occupied by a less than half finished tapestry, the 4th in the Chaotic Fragments series. So I knew I would have to finish it and put a new warp on the loom by January 1. 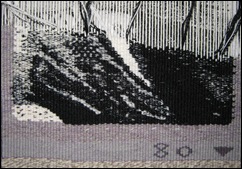 Chaotic Fragments Part 4 is about 9x9”. For some reason I decided not to include my signature (a triangle representing a capital A) in the tapestry, because there didn’t seem to be a good place for it. So instead, I wove it into the border, upside down so it will be right side up after it’s hemmed. As long as I was at it, I thought, why not weave the year too? Brilliant idea, except now I realize I should have waited until the end. Kind of embarrassing to have 08 on it, when I didn’t finish it until  2010! 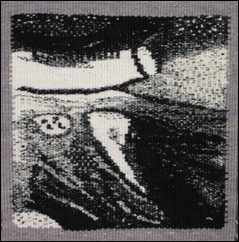 What with all my Canasta responsibilities I didn’t finish the tapestry until January 1. I hate showing a tapestry before it’s been in an exhibit, but I’m so happy it’s done that I can’t resist. Here it is, but not hemmed yet.

I actually got the new warp mostly onto the loom the same day.

On January 2 we drove to Cape Cod for my Mom’s Memorial Service. Mom passed away in September and we had planned this so that her grandkids and other far flung family could attend. It was a beautiful ceremony and so very healing. 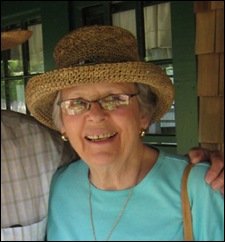 I loved one thing that the minister said, that the loss is never more important than the gift. So true. We realized today that yesterday’s date was a palindrome! 01 02 2010! Mom would have loved that.

So today, January 3, was the first time I had a chance to finish preparing the new warp and start weaving the tapestry diary.

My plan is to weave a parallelogram every day, about 2 inches wide and 1 inch high. I got into weaving this shape years ago, because it’s essentially a lazy line with color changes. I have woven a couple of tapestry exercises like this.

There will be 7 across, so every inch will be a week. Every month will have a color theme. On the first day of the month I will weave a stylized letter to indicate the month, for example J for January, seen here on the left side of the tapestry.

If I miss a day, I’ll just weave it the next day. I had not intended to include any imagery, but then I decided I had to include something special in the January 2nd entry, to note my Mom’s Memorial Service. So I wove the letter M for her name, Marian.

For January 3, I wove a silver wing because both of my daughters were flying away on airplanes; one home to California, and the other to Florida for a vacation. 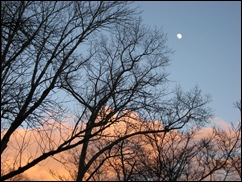 Since most days are uneventful, then most entries will be much simpler, and all will be woven from my large bag of left-over wefts.

Knowing me, I could spend a lot of time agonizing over the exact colors! I’m really excited about this project.  Happy New Year!

Jan,
Your Mother must have really been something special. And the start of the 2010 tapestry with her initial will be a reminder to you always of her many gifts.
Tommye

I love the statement the minister made that the loss is always less than the gift. I hope to remember this always!

Your tapestry diary is looking great! How nice that the very beginning has some powerful emotional symbols for you!

I love your idea of a year long tapestry, and especially how you are symbolizing your mother right there at the beginning. It's just perfect!

What a neat tapestry diary idea! I love how you're weaving in symbolic images to mark special days. Please do keep us posted on your progress.

Happy New Year, Jan! The things we weave into our tapestries is what makes them special - even if we are the only ones to know they are there.

I hope you'll eventually share your small format piece on the blog. I have found that those who see my work at exhibits and those who see it on the blog are, for the most part, different people. I tend to be a blog-looker, and not much of an exhibit-goer.