Oops, Forgot to Finish the Story 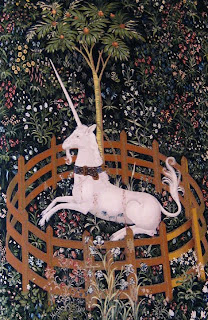 Thanks, Edith, for pointing out that I never mentioned whether I finished my tapestry before leaving home. Yes, of course, in typical fashion I finished it about 2 days before we left, and managed to get a good photo or two.

I am not going to post a photo of it on the blog, because I am planning to enter it in ATB8. I'd be delighted if it could make it's debut there, but if not, then you'll be the first to see it, at least as a photo. I don't know why, it just makes me nervous to show it online before it's been entered in a juried show.
We've been traveling for almost 3 weeks now, and so far it has been fabulous. I have taken so many photos, and I'm spending a lot of time editing them. I'm behind on my blogging, but hope to catch up soon! 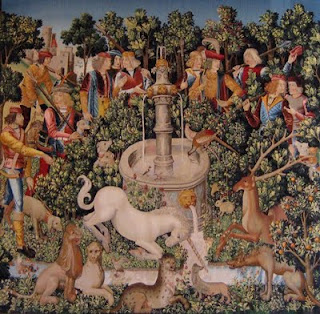 Right now I'm sitting in my B&B in Stirling, Scotland, having visited the castle and the tapesty studio (with unicorns in progress) today. I can't describe how moving it was to see the tapestry being woven. It is incredibly beautiful, as are the completed tapestries, but it's more than that; it feels like the closest I can come to seeing the original tapestries the way they were 500 years ago.
Tomorrow is the British Tapestry Group conference, which I will attend and report on later.
I'm also working on some other tapestry stories, so check in again soon.
Posted by Jan at 11:42 AM

Glad to hear that you got the tapestry finished in time! Mind you there was never really any doubt.......
Gosh are they the unicorn tapestries?? Oh my, oh my, my, they are amazing even in a small photo!!
As for your tapestry..I shall look forward to seeing it whenever you are ready to show it....though there were a few glimpses and brief sigytings in previous posts......