My box of fine tapestry wools arrived from Weaving Southwest and I just could not resist. I wanted so badly to weave with it right away, so although I have 3 floor looms with tapestries partially woven, and numerous smaller frame loom projects, I jumped right in.

My copper pipe Archie Brennan loom had an empty warp, 5 inches wide, so I thought, Why Not? My computer is loaded with photos, and lately, I've been thinking a lot about trees. I want to try weaving from a photo and interpreting it very loosely for a change. 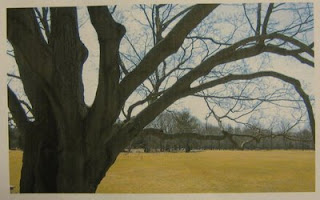 Back to the subject of yarn, this kind comes in skeins, which look so lovely, but require some time to wind into balls.
I have a perfectly functional Ball Winder, which makes balls that stand up and can be unwound from the inside. 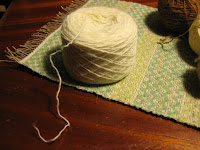 I've had this since I bought my very first loom in 1972, at the original Earth Guild just down the street from my apartment in Cambridge; a few years later I moved to North Carolina, and shortly after that they moved to Asheville, where they still operate. It cost me about $5, and it now has more miles on it than any car I have ever owned. 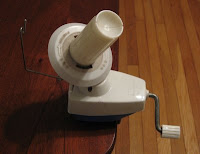 Back in my semi-production weaving days (I made about 60 scarves and 60 shawls one year in the late 70's) I spent entire days winding balls. My Ball Winder has never caused any swearing or gnashing of teeth, unlike my Swift. 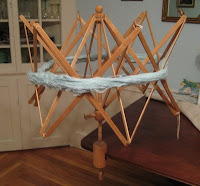 When the swift was new it would often surprise me by suddenly collapsing, allowing the half unwound skein to fall down. Somehow, like a child in the terrible twos, it grew out of that difficult phase, and has been a model citizen ever since.
Nevertheless, I was on the sofa watching TV with my husband the evening after the box arrived, and did not feel like going into the studio, so I just draped a skein around my knees and started winding an old fashioned ball. 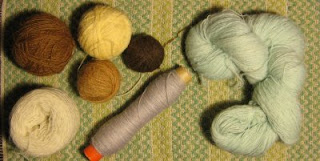 It's so ROUND! So I made some more. I love the way they look, and for tapestry they are not terribly awkward to handle. Still, I think I'll have to spend a day with the ball winder and swift some day soon.
Posted by Jan at 11:23 PM

$5 for a ball winder! You should see the prices now at Earth Guild!
Glad to see you jumping into your new yarns like a kid on Christmas!

It really did feel like Christmas, so I couldn't help it. Isn't it more fun to start something new than to finish up the old projects?