For the second time this week, I took my show on the road. On Wednesday I gave a lecture and demonstration for the Cranberry Country Weavers Guild. It's always fun to talk about tapestry with people who already know how weaving works, and understand the difference between warp and weft.

Today I spent the afternoon demonstrating tapestry weaving at Smith's Castle, which is not a castle, but a very early colonial homestead. The land was purchased around 1637 from Canonicus, the great sachem of the Narragansetts, by Roger Williams, the founder of Rhode Island.

Williams was an early supporter of religous freedom ("forced worship stinks in God's nostrils"), and an advocate of fair treatment for Native Americans. He came to Rhode Island after being banished from Massachusetts for these radical ideas. Richard Smith bought the property, and died, passing it on to his son, and in 1675 it was the gathering place for an English army involved in King Philip's War. 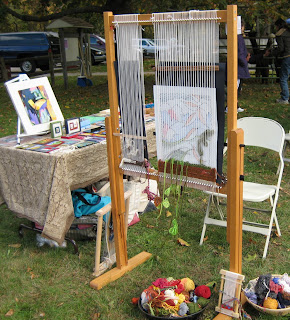 As usual I enjoyed weaving in public, although it's hard to get good results while so distracted. One of my blades of grass seems to have taken a wrong turn. People were quite amazed to see me "weaving a picture," as I described it to the small children.

I always bring along a few small frame looms so people can try it out for themselves, and a lot of children did.

I had planned a simple image of autumn leaves, and for a change I used only 4.5 warps per inch in the hope that it would be easier for people to see what I was doing.

That's what you get on the Friendly Loom if you wrap 2 warps between each peg. 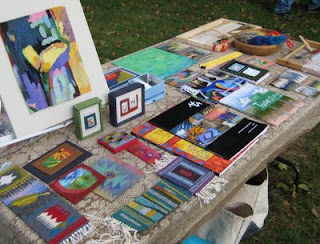 It's also what you would get if you just use the handy pegs for warping, but I've found that with the super tight tension I like, if I use the pegs, it makes the top and bottom beams tilt, and I worry that something will snap. So I just wrap it around instead, and then I can weave on both the front and the back.

I usually weave at 9 or 10 warps per inch, so this is a major adjustment. I was using a very thick bundle of weft, so the tapestry looks very wooly and textured, but with only 4.5 warps per inch, it was hard to get the resolution I like. I told one observer it's just like a digital camera, I was operating with way too few megapixels.

I explained that I was weaving with thick wool so the image would progress faster, otherwise it can be like watching grass grow. Then I realized that in fact, it WAS watching grass grow, since I spent most of the day weaving a few blades of grass! 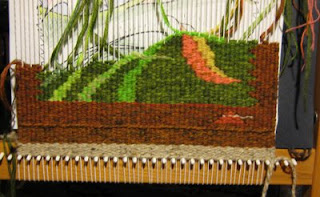 If you compare the before and after photos you'll see that I did make pretty good progress.

There were 2 adorable adolescent Alpacas in the next booth, and at the end of the day I treated myself to some irresistably soft socks and a skein of gorgeous black alpaca yarn.
Posted by Jan at 12:00 AM

I enjoyed your post; thanks for sharing your day.

Thanks, Diane. It was a day worth sharing. I'm jealous of your new dog, I LOVE border collies, and he is SOOO cute. I've always heard that they need to work, so perfect for you, but wouldn't be good for poor sheepless me.

I saw a comment you left on the RI Spinning Guild's blog. You said you were unable to use our email. I've checked and it seems okay. If you have problems, please let me know.
I am happy to have this link to your blog. Very interesting and your work is beautiful.