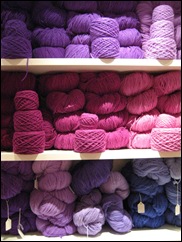 he first time I met James was a few years ago, at the Fiber Art Center in Amherst, where he spoke to TWiNE (Tapestry Weavers in New England). I had seen his amazing work of course, and knew how successful he was, so I was quite surprised to find him unassuming, friendly and kind.  His lecture was thought provoking and inspiring.

Last summer, after Convergence in Albuquerque, I went to St John’s College in Santa Fe, for the ATA retreat “Tapestry Enchantment,”  where I spent 3 days learning from James. I discovered that his reputation for being an incredibly generous teacher was well earned. 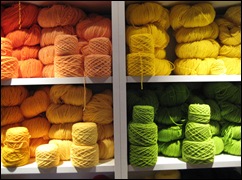 On the first day, James talked to us about creating layers of image and/or meaning in our designs. I was working on sketches of Moon Snails, and once he realized I was drawing a complete blank, he suggested the word Moon!  Pretty obvious, but it had not occurred to me. My design process does not involve a lot of thinking, so after the initial excitement, I was still baffled as to how the moon could be incorporated into a design with the snail, and decided to forget it.

James invited all 32 of the retreat participants to visit his home and studio one evening. Here are a few photos from that visit. 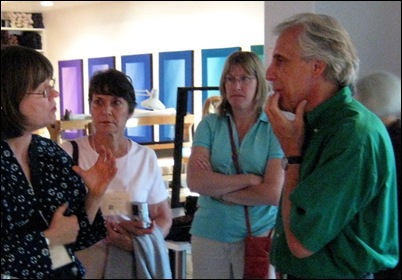 Although he could be wickedly funny at times, this photo shows how seriously he listened when his students asked him questions. He told us that if we had questions later we could email him, and if he felt it required more than an email he would talk to us on the phone. He said that once we took his class we would be his students forever, and he was right about that. I’m sure none of his students will forget what they learned from him. 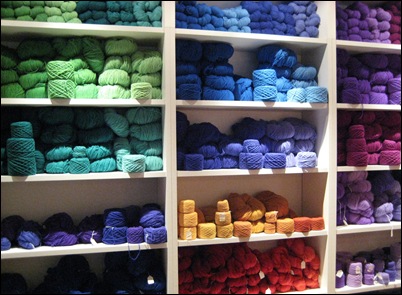 Seeing his luminous hand dyed yarns on the shelves, and his tapestries on the walls was inspiring. Everything about James was inspiring. I was  completely shocked to hear of his death. It is a huge loss for the many many people who were touched by this exceptional artist and man.

Perhaps the best tribute will be for his students to make an extra effort to live up to his example, in our art and in our lives.

Thank you for your wonderful words, Jan. James has left us with the treasure of his art - and himself. He will be sorely missed.

It's so hard to think of tapestry weaving without thinking of James.

A wonderful tribute to a wonderful human being. He will be sorely missed and he leaves so many dedicated students and friends behind to carry on their commitment to his art and the values he not only taught, but lived.

You captured the essence of James Koehler so beautifully Jan. James left a huge impression on me when I took a class from him in Taos, over 10 years ago. I always thought I'd be able to take more classes from him in the future. We didn't just lose an artist, we lost a beautiful human being.

You said it, Nanci, we has a beautiful human being. Hard to describe, but when I look at his tapestries and his yarns, I think of James bringing forth this color and light and serenity in his art.

That part of him we will always have.

Did you ever hear the story of Matisse? He brought one of his paintings to put in the room of a friend who was ill. Matisse believed that the colors in his paintings could heal. I always thought he might be right about that.

No, I had never heard that story of Matisse, but I know it's true. I have a gorgeous 4' X 6' tapestry by Maximo Laura on my dining room wall that brings light and vibrancy into the room during the long cold Michigan winters. It is how I get through the winters here. And I often stop to wander into a drawing that an artist friend sent me, that I hung at the top of the landing. It makes me smile to see the little trolls marching through the woods, looking for their home, reminding me that I'm not yet where I belong but I'll get there.

Art does that, in its many forms. You are right that James' tapestries reflect his spirit. Watching the little video he has on his website, after his explanation of how he weaves, the part where they start showing pieces of his work, the 5th piece, as it rotates, lets me imagine that's his spirit rising as he left this plane of existence. He will always be in the beautiful tapestries he has woven; literally, and figuratively.